The Best Cook in the World: Tales from My Momma's Table 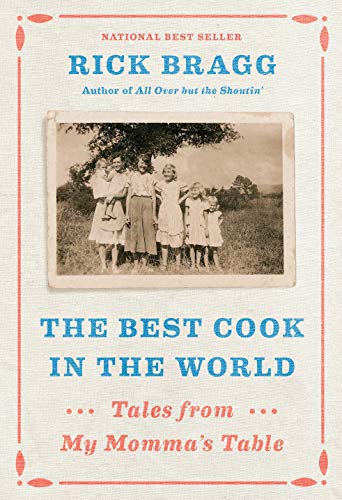 You can read this book for the stories, or the recipes, or for the language. Or for all of the above. It’s likely that you’ll find this book mouth-watering and likely, too, that you’ll want to eat traditional Southern cooking of the sort that Rick Bragg’s “momma” made.

The author isn’t the kind of guy who uses the word mother, though he does have a recipe for his mother’s apple pie. Her recipe for “quick fried apple pie” is the last in the book.

With a name like Bragg, the author has to do some bragging.

There’s a lot more bragging, but it goes with the territory that the author has staked out and claimed for himself.

Born and raised in Alabama, and the author of All Over But the Shouting, Ava’s Man, I Am a Soldier, Too and Somebody Told Me, Bragg is a natural-born storyteller, apparently a damned good cook, and a man with a hearty appetite who knows how to handle a knife, fork, and a skillet.

Bragg’s new book belongs on a shelf along with Jim Harrison’s The Raw and the Cooked: Adventures of a Roving Gourmand and A Really Big Lunch: Meditations on Food and Life from the Roving Gourmand.

Granted, Harrison hails from Michigan and unlike Bragg, he was mainly a fiction writer. But the two men both loved to eat and they both write enthusiastically about American food and American cooking.

The Best Cook in the World has recipes for fried chicken, corn bread and gravy, as one might expect, and that Jim Harrison would surely enjoy.

The book also has some unusual dishes. There are burritos made from pig tripe, baked hog jowls, and a dish called “Immaculate Cheeseburger” that’s prepared with tomatoes, lettuce, mustard, mayonnaise, ground beef, American cheese and bacon grease, plus a bottle of Heinz ketchup, and a root beer to chase the grease.

In the recipes that he offers, Bragg usually insists on grease and on lard, though he’s not adverse to butter, and lots of it.

He’s wise enough to know that a recipe is “more than just a blueprint, but a kind of history.”

Not surprisingly, he takes aim at foodies, at the farm-to-table movement, at city folk, and even at lawmen.

Apparently his mother had no choice but to steal at a few junctures in her life. Poverty has a way of doing that. So it makes sense that when Bragg thinks about his “momma” he also thinks about Charles Dickens and his world. There is, indeed, something Dickensian about her.

The Best Cook in the World celebrates poor Southern whites, though to read about the food that the author’s family ate most of the time they might not have thought of themselves as poor, or even as white.

There’s very little in this book about skin color, race, and African Americans. One wonders why Bragg didn’t venture into the complex and tangled arena of black/white relationships in the Old South.

He does mention Lead Belly, the legendary African American blues singer, but there’s not much about black culture and history. Perhaps it’s just not his area of expertise.

Still, there is a lot about white, Southern working class ways.

“Working people,” Bragg explains, “could not afford to remain ignorant of the sky, the rain and the chemistry of the turned earth underneath.”

One wants to shout “Amen!” and “Halleluiah!”

Is every word in this book literally true? Probably not! In addition to the bragging, there’s Bragg family lore and legend. Still, there are plenty of family photos to go with the family legends, so you know the people are real, or at least as real as a photograph can be.

The Best Cook in the World would make for a timely gift on Mother’s Day or any other day of the year. The book definitely conjures a world with its own sights, sounds, and smells.

The recipes read as though they were tested in a kitchen. Bragg includes the ingredients and the necessary steps for each dish that he writes about.

If you let it work its culinary magic, The Best Cook in the World will probably transport you to Alabama today and then back in time to the 1920s and to the Depression of the 1930s.

Before you venture very far into the pages of Bragg’s portrait of his mother, his aunts, his uncle, and cousins you may well feel like a member of the family.

Pull up a chair, sit down at the table and enjoy the descriptions of chicken roasted in cider, sweet potato cobbler, and the barbecued rag bologna sandwich. It's not just the French who have created culture at the table.

Families in the Deep South have done much the same.

New York, L.A., San Francisco, and Parisian gourmets and gourmands will find a lot to enjoy in The Best Cook in the World. They may want to surrender their beloved palates at least for a meal or two and savor Rich Bragg’s amazing culinary world.

Rick Bragg is the author of eight books, including most recently The Best Cook in the World: Tales from My Momma’s Table, a journey into the culinary world of his own family and the American South. No one who writes about food today is more conscious of its connections to social and economic class, and the lives of working people, black and white.

A Pulitzer Prize winner, and a contributor to Garden & Gun Magazine, Bragg teaches writing at the University of Alabama. Food, family and storytelling are at the heart of his world. A natural-born writer, he speaks with a distinct southern accent and with a genuine sense of humor.

Where are you right now?

In Tuscaloosa, Alabama waiting to teach a class on long-form writing. Today is grading day otherwise known as “Come to Jesus Day.” I tell the students writing is much like food. It has to have color, detail, and image.

Were there restaurants in Possum Trot, Alabama, when you grew up there in the 1960s and 1970s?

There were cafes and truck stops. At one place you could get a foot-long hot dog with all the fixings. It was so good you could eat the wax paper.

In your recollection, did poor whites and poor blacks eat the same food?

Working folks of all colors ate, beans, corn and potatoes. Pork was a seasoning. Black or white it was all soul food, and it was good.

Is there a dish that reminds you of your mother’s cooking more than any other?

A tomato on a biscuit split open and drizzled with redeye gravy that’s made with salt pork, ham, coffee and black pepper.

Did you test the recipes that are in your new book, The Best Cook in the World?

We tested some of them, and those that we tested were good. We hope they work for people who want to follow them.

Did your family say grace when you were growing up?

There was interminable grace. At dinnertime I couldn’t wait for my uncles to finish saying grace. Most of my people were Pentecostals. There wasn’t a short prayer in their whole lexicon. I would listen patiently and hope the biscuits wouldn’t get cold.

You’ve heard of “Slow” Food and “the Farm to Table Movement”?

When my mother heard about that movement she laughed and said, “Isn’t that a truck?” Growing up, all of the food we ate was slow food. Eating was the best part of the day.

Your mother is still very much alive, isn’t she?

Yesterday we celebrated her 81st birthday by not cooking. We went out and bought BBQ and then came home and ate it. I listened to my mother tell stories. There was no better way to celebrate.

I don’t like chitlins, can’t stand the smell of them.

If you could make something for French President Emmanuel Macron who visited the U.S. this past week what would it be?

If he wasn’t worried about his blood pressure and didn’t have dietary restrictions, I’d make beans with ham fat, onions, salt and pepper, along with corn bread muffins, red potatoes, cold slaw, short ribs and fried chicken, which is what we all live for, and for dessert butter rolls. They’re better than bread pudding.

Are you a good cook?

Heavens no, I’m a miserable cook. I was spoiled by my family’s cooking.

I’m going on a book tour in May. I’ll look for anything that’s like the food I grew up with, including fresh picked green beans and mac ‘n’ cheese.