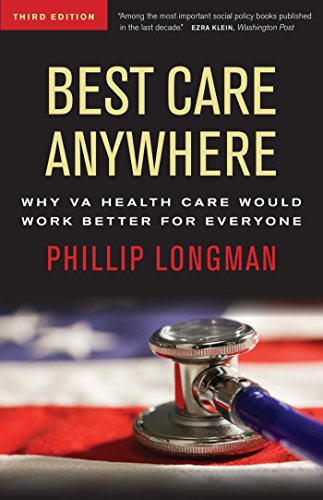 Best Care Anywhere is an amazingly positive title for a health care reform book. The confounder comes next, Why VA Health Care Would Work Better for Everyone, which contradicts the popular notion that the Veterans Administration is run with incompetence—unlike our vaunted private sector health system.

If that doesn’t grab your attention, look at the fine print to see that this is the third edition for this book, which means it is so compelling there have been multiple printings. Why have others found this book so enthralling?

Mr. Longman asserts that health care policy is shifting at the speed of a hummingbird, barely noticeable to the eye as it sweeps past our field of vision in a blur of red and gold. The reason for the abrupt about face is the escalating cost of health care for the entire country, but especially the cost of Medicare.

Using for his example the US Veterans Administration’s remarkable turnaround in quality health care at very affordable prices, Mr. Longman shows us how the methods could work for the country as a whole.

The primary legs of the V.A. support system are a completely integrated health care system, an information system driven by patient outcomes rather than reimbursements, incentives to save money by avoiding unnecessary procedures, and the power of mass purchasing.

From a basic business case perspective this sounds like a no-brainer—Why wouldn’t we want to do this?—but as the author reveals, there are plenty of ill advised endeavors and negatively reinforced health care functions in the US and changing those is no easy task.

So, with that in mind, this book is best read by those who can keep an open mind regarding their present “knowledge-based” idea of the health care system.

Fifteen years ago through the publication and subsequent congressional scrutiny of its medical errors, the Veterans Administration earned a reputation for shoddy health care. But some wildly creative people within the VA system worked beneath the radar of the Veterans Administration leadership to create the best medical records system in the country, one that has been used as a model for other countries, an open-source program called VistaA.

This was done without the millions of dollars poured into the private sector to build proprietary medical records software systems, like Epic and Cerner. It was created by clinicians to improve patient care and not driven by insurance reimbursements. As well, it is an open source program (meaning that anyone can edit, update, and improve its source code), which explains its success and attractiveness to 85 countries, as cited in the Open-Source Medicine Chapter.

Mr. Longman show how the communications system within the VA is just one of many examples of how this integrated health care delivery platform works better for both patients and taxpayers.

In Mr. Longman’s chapter on the Obama Administration’s health care reforms, we learn that the initial proposal was to include a government option in the insurance exchanges, but the private insurance industry quickly scuttled it.

Even more telling was the unwillingness of the administration to consider including the VA as a public option, despite its lower cost and excellent clinical outcomes. The nation continues to foist veterans into the more expensive less effective private health care system through Medicaid and Medicare—and at a higher cost to the taxpayer.

Mr. Longman reveals the political machinations employed to reduce the scope of the Veterans Administration’s reach because it is in many ways too effective, thus perceived as interfering with the ability of the private sector health care suppliers to mine their own gold from the existing health care system.

This perversity is a metaphor for myriad consequences, unintended and intended, creating the mess that is our nation’s current health care system. Read Best Care Anywhere not just to learn about one of our public health agencies that is a global star in terms of cost effective, evidence-based results, but also to learn how your own health care process can be improved by adopting the Veterans Health Administration’s methodology for transparency and patient-centered care.