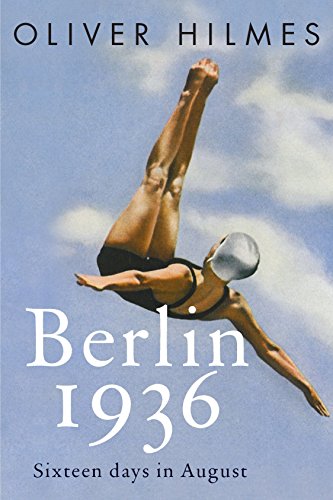 The 1936 Summer Olympiad marked pivotal moments in history for world athletes and world politics. The events that took place in Hitler’s new stadium provide the backdrop in Oliver Hilmes’ dramatic social history of the games in his book Berlin 1936 as he chronicles the stories of the athletes but also the stories of what was happening to ordinary Berliners during those fateful 16 days in August.

Hitler’s propaganda minister Joseph Goebbels sought to exploit the Olympic spectacle to convince the international leaders that the Third Reich was a peace-loving nation when the exact opposite was true. Goebbels had scrubbed the city of any evidence of visible signs of the Nazi’s brutal oppression of Jews including temporarily banning the viciously anti-Semitic tabloid Der Stürmer, which was usually available everywhere in the city.

Meanwhile, Hitler’s elaborate diplomatic dance was underway to seduce international leaders who came to the games, many who were already turning a blind eye to Nazi atrocities against Germans already deemed impure Aryans.  Germany’s top officials threw elaborate parties and events for state dignitaries, celebrities, and heads of state from around the world.

Among the high-profile stories, Hilmes chronicles include the drama between Goebbels and filmmaker Leni Riefenstahl who was shooting the penultimate propaganda film Triumph of the Will. Goebbels wanted to control her content, but she was granted carte blanche by Hitler. Also fascinating is the moral awakening of American author Thomas Wolfe (Look Homeward, Angel) who returned to his favorite city Berlin for the games and the nightlife, an avowed Nazi sympathizer who felt Hitler was rebuilding a nation—until he learned the details of what was being hidden from the world.

The book is written in episodic structure, but it is with the stories of the lives of everyday Germans that are most engaging. The anonymous victims of the Nazi purges—the woman who threw herself in front of a streetcar rather than submit to the oppression, the transgender woman who chose suicide rather than living under constant fear and oppression as she waited for the Gestapo to bust down her door. Or the family who had partial Jewish heritage, but were religiously unaffiliated, but were taken from their home—along with hundreds of other families—to be silenced in a makeshift tent camp just outside the city during the games.

Thirteen-year-old Peter Fröhlich was rooting for American teams, hoping they would beat his country’s. His parents were non-practicing Jews, but they knew what they faced if they stayed in Germany.

As the lives of citizens and families were being destroyed as Hitler his eagle's nest in the Olympic stadium. Hilmes writes brief, chilling episodes of Hitler as he presides over the games. On the day African American runner Jesse Owens streaked across the track on the way to winning his fourth Olympic Gold medal in the 4x100 meter relay, Hitler sat in disgust at Owens’ victory in the stadium eagle’s nest.

Owens was not supposed to run but was put in after his Jewish-American teammates had been taken out of the relay team. He refused at first but agreed to run at the request of the team, knowing it was their only way to win. The intrigue behind the scenes almost turned into an international incident. German officials threatened to expose the fact that the American ambassador for the IOC had pressed the team to remove the Jewish runners.

Hilmes has written an episodic social history of Berlin and the Olympic Games. The unconventional, almost cinematic structure can frustrate as he cuts away from some of the stories at key points. We don’t find out what happens to many of the people in the book until the final chapter, and in some cases, their fates are ominously never revealed.