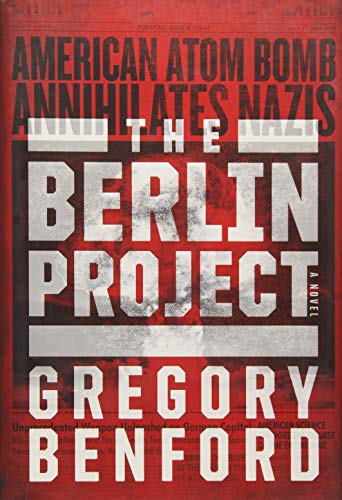 “proceeds at a brisk pace and accomplishes the theme of alternate history with style and intelligence, offering up a fascinating glimpse of What if?”

Alternate history is a unique genre of science fiction that allows authors to tell a story about how the fragile path of human decision making and happenstance could have been different.

Naturally, significant historical events like World War II provide a number of so-called “points of departure” for readers of this genre, those events or actions that try to answer the question “what if?” a small change to an event could have changed the following course of history.

Greg Benford, Nebula Award winning author and astrophysicist, has taken an unusual tactic on the typical alternate World War II history story by asking, “What if the Allies had developed the atomic bomb a year earlier—in time to use in the war on Europe?”

What follows is a fascinating combination of science fiction, espionage thriller, and military history to determine how D-Day and the entire war in Europe in 1944–1945 might be been far different. The characters are a wonderful blend of real people who many readers will recognize and some fictional characters—all handled in a completely realistic and believable manner in Benford’s alternate timeline.

The story starts much earlier than 1944, and Benford takes the reader, sometimes very laboriously, through almost a novelized history of the search for atomic power, the flight of many scientists from Nazi Germany, and the beginnings of the Manhattan Project.

Although this story setup is crucial to getting to the point of departure—a decision to use a different method of separating and enriching the Uranium used in the first atomic bomb than history actually records, it does occupy an inordinate amount of the book. The author definitely shows his academic background as a physicist with a sometimes dizzying amount of detail on how the first bomb was engineered and built.

However, once the story is fully committed to the alternate timeline, the action picks up and leads the reader in many unexpected directions that really make this book thought provoking.

Not to give up any spoilers, but the atomic bomb in this timeline does not become the strategic weapon that convinces Japan to surrender, but merely a really big explosive device that is used in a tactical manner. Needless to say, the bomb does not, as the story goes, give the Allies the outcome they intended, and instead allows the author to speculate on how, amazingly enough, the fighting and killing between the Allies and retreating German forces could have been even more bitter and heinous.

Finally, the author does a marvelous job of blending political thriller, spy novel, and science fiction to close out the story, showing how a world changed by the co-existence of peaceful nuclear energy and the horror of atomic warfare might have developed if the Allies had developed the atomic bomb a year earlier.

Once the author sets up the story, it proceeds at a brisk pace and accomplishes the theme of alternate history with style and intelligence, offering up a fascinating glimpse of What if? If you are a fan of Harry Turtledove or Robert Conroy you will enjoy this novel.