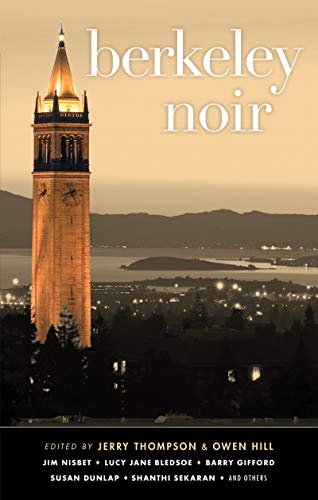 The thing about a smorgasbord is that you don’t need to savor every offering to feel happily fed.

The Akashic Noir Series is a jaw-dropping project. Or, to extend the food metaphor, a full-fledged feast. The series has taken readers on more than 100 short story trips around the world and across the United States. Each anthology is edited by talented writers (such as Lawrence Block, Dennis Lehane, and Joyce Carol Oates). And every excursion into these pages guarantees one common element.

Berkeley Noir—co-edited by Jerry Thompson and Owen Hill—is ample proof that as a concept noir is in the mind of the storyteller, the same way that beauty is in the eye of the beholder. But this volume proves yet again that noir is discoverable anywhere there are human beings—in this case, a quirky university town on the east side of San Francisco Bay. Humor and violence are frequently joined at the hip (or holster). The high price of real estate, homelessness, and class issues abound. A line from co-editor Owen Hill’s solid contribution, “Righteous Kill,” could serve as a tag line for the whole volume. “True civilization starts with cheap rent and ends with gentrification.” Let’s say the Berkeley portrayed in these pages is long past the cheap rent stage.

Lexi Pandell kicks things off with the chilling “Hill House,” about a house-sitting grad student named Mariana who is about to find out something that would take the shine off a revered professor. She’ll also soon receive a surprise visit from a sketchy brother who needs her help. Jack “tells me that sometimes, the impulsive plan is the best plan, the hardest one to track,” thinks Mariana. “And when I sent him the image of the garden, and when I said that I was alone house-sitting, and when I kept calling and calling, it seemed a little like fate.” Suffice it to say, when Jack is finished with his work, Mariana is happy to have a reason to move back to New York City.

Entry number two is another winner. In “The Tangy Brine of Dark Night,” by Lucy Jane Bledsoe, Kaylie is heading to the Berkeley Pier in her grandma’s old white Pontiac. Grandma is in the back seat. During a traffic stop, Kaylie finds herself smitten by the female cop. But she’s also hopeful that the woman in uniform doesn’t try to wake up grandma. Kaylie has other problems, including deep uncertainty about her own future and a sister who has a “sixth sense” for danger. This one ends on a kayak in the bay and Kaylie telling herself to be swift—and careful.

For sheer boldness, Shanthi Sekeran’s “Eat Your Pheasant, Drink Your Wine” is told by a talking rat (with vertigo) who knows his heart rate (four hundred beats per minute) and gets tangled up in a human relationship that doesn’t end well. Kimn Neilson’s brisk and efficient “Still Life, Reviving,” features an unidentified narrator recalling how a simple boat-cleaning job proved to be a trap that cost her 15 years in prison. And how she plans to get even.

If the “J” in J. M. Curet’s name stands for James, that might make sense because there’s a strong James M. Cain vibe to “Wifebeater Tank Top,” among the grittiest entries here. “She wore a wifebeater tank top without a bra, denim shorts more risqué than the dress from the day before, dark shades, and an A’s baseball cap. I decided to tempt fate and take out the garbage.” Our hero Red survived a ten-year stint in San Quentin. Now, he’s trying to keep his head down. Except the temptress Teena. Red is philosophical. “I always found the phrase against my better judgment oxymoronic. How much better can your judgment be if you’re going against it?”

Story to story, your noir mileage may vary, but Berkeley Noir is another fine entry in a series for the ages.