Bent But Not Broken 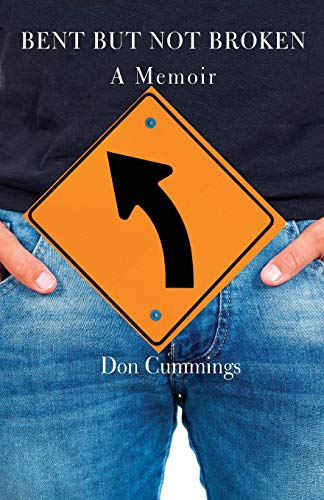 “In Bent But Not Broken, Cummings has invited readers into his life, and the result for many will be a feeling of knowing this man well. Very well. It is a relationship with a storyteller that is entirely worth experiencing.”

Don Cummings begins Bent But Not Broken with a quotation by “Confucius, and others”: “The green reed which bends in the wind is stronger than the mighty oak which breaks in a storm.” This thought is intended, the reader may suppose, as a message of comfort to those who suffer, as Cummings does, from Peyronie’s disease.

Cummings, an author, playwright, and performer, has written a memoir that is also a manifesto, a missive of support, and a fearless monologue. The word “unflinching” only does partial justice to the courage of Cummings’ account of his life.

Indeed, the tone of Cummings’ book is that of a conversation with a close friend whom the narrator trusts enough to tell the most intimate details. Despite the realities of the editing process, if readers were informed that Cummings held back anything, most might react with substantial surprise. This is not the kind of history that leaves much to the imagination.

Cummings is of course the protagonist of his story, but his penis is an ever-present and often problematic sidekick. Several of the themes of this memoir are almost like secondary characters. The ravages of aging appear as a recurring subject, as do questions of fidelity, family, and self-awareness.

Cummings gets right into the medical condition that inspired the writing of his memoir. The first page of Bent But Not Broken informs readers that painful erections and painful sex with Adam, Cummings’ long-term boyfriend, were the first clues for Cummings that something might be seriously wrong.

Cummings is honest, sometimes brutally so, in describing his relationship with Adam. When he tells Adam of his concern about his penis, Cummings describes Adam’s response: “He smiled, slightly supportively, somewhat derisively, as he always did when presented with any frailty, especially my frailties . . .”

Cummings is no less forthcoming when describing his own foibles: “I like people who don’t care too much about me at first glance. I’m used to it. But I also hate it.”

Cummings’ search for a cure to the disease that is causing his penis to bend leads him to a doctor whose name keeps showing up online. Cummings describes, in often painful detail, the treatments. There are a lot of needles and bleeding involved, along with hours spent wearing a penis stretcher, repeated curvature assessments, and encounters with less-than-compassionate medical personnel.

In the midst of recounting his entirely understandable fear and anguish, Cummings shares moments of sublime wit. Speaking of the fibrous material that is among the causes of Peyronie’s, Cummings tells Adam, “I’ve named my scar tissue Roberta Plaque.” After a treatment, Cummings wonders if he’s being given a placebo by a “bunch of cock quacks.” It is challenging to not laugh aloud at the subtitle of one of his chapters: Taint Good.

Cummings alternates his search for relief from Peyronie’s with flashbacks to his childhood, college years, early adulthood, and past relationships. He unsparingly recounts ugly arguments with Adam, the frequent drinking of too much wine, the death of Adam’s father, and a truly terrifying episode in which he is drugged by an attractive man in a gay bar and is kidnapped to a sketchy restaurant in the Bronx, where the man disappears with Cummings’ credit and debit cards.

Cummings also shares the positive aspects of his relationship with Adam, saying that the good times, “took up more hours than our troubled minutes.” Though they come perilously close to breaking up for good, their relationship is ultimately saved, and they are now married.

In the end, the treatments, or perhaps, as Cummings observes, time taking care of everything, result in his penis getting better. The final chapter of Bent But Not Broken (subtitled Members Only) offers Cummings’ thoughts on dealing with Peyronie’s, with the proviso that he is “one person who went on one journey.” The last words of the book are realistic and encouraging for sufferers: “You will have your hopeless, angry, sad and frustrating days. Try to remain positive. No one ever died from Peyronie’s disease.”

Throughout this compelling memoir, there are universal truths among the specifics of Cummings’ life and his battle with a specific disease. As he observes of losing the pervasive sexual attraction he inspired in his youth, “age will age you,” words which will come as no surprise to anyone who is old enough to run for president. And readers who have ever been involved with—well, anyone—will perhaps find themselves nodding at his succinctly and poetically expressed: “Every relationship is its own torture rack.”

In Bent But Not Broken, Cummings has invited readers into his life, and the result for many will be a feeling of knowing this man well. Very well. It is a relationship with a storyteller that is entirely worth experiencing.

And if it might be considered glib, or in questionable taste, to point out that it is not necessary to have a bent penis, or a penis at all, to relate to Cummings’ fears, hopes, and struggles, it might also be just the kind of observation Cummings himself would enjoy making.