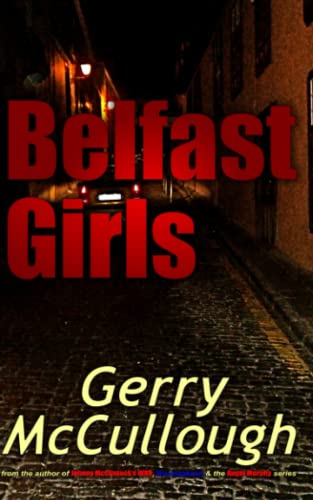 It is hopeful that Belfast Girls is a prelude to greater things to come.

This literary offering is a good start for Gerry McCullough. Her first novel, set in present day Belfast, makes good use of place, time, and character development. It is, at its core, a romance, with Northern Ireland and the Republic of Ireland as its backdrop. Though it chimes in at 346 pages, it is a quick read—well worth the price.

The tale revolves around three childhood friends (Sheila, Phil, and Mary) as they attend college, the men in their lives, and the events shaping and molding them into mature young women who face their individual trials and tribulations and learn the value of family, friends, and faith.

Sheila becomes a world-known model surrounded by many admirers, but feeling alone and separate, longing for her journalist boyfriend John Branagh to stop judging her and come to his senses.

Phil can’t let go of her attraction and desire to be with Davy Hagan, even though his involvement in drug trafficking has her paying the price for his behavior.

Mary gets mixed up with a party crowd, almost dies from an overdose, and finds herself in a religious community. There is a clear inspirational and moral thread apparent throughout.

Sheila is the character that tends to be the most striking and memorable, though Phil and Mary each have equal billing in time and attention. All of the women’s reactions, though at times predictable and stereotypical, are believable, as are their families and friends.

The courtroom scenes with Phil protecting Davy are especially poignant. It may or may not be an Irish trait, but it appears that the people inhabiting this story are emotional, without being oversentimental. Put another way, they live their lives without having great expectations, but appreciate brief glimpses of insight and understanding.

It is no great surprise concerning relationships how often we see what we want to see, but it becomes apparent to John when he realizes that, “He had never cared for the real Sheila, only for his own idealization of her.” There is melancholy for what may have been if they’d made different choices, but nobody stays overly drenched in regret or grief for the past.

Ms. McCullough’s other recent release Angel In Flight: An Angel Murphy Thriller, from the same publisher, may be worth checking out. If it has the same solid foundation as Belfast Girls, less predictability, and a little more depth, it will be another step in this author’s journey to becoming not only a good writer, but a great writer—to the benefit of readers’ in all republics and nations.