Belabored: A Vindication of the Rights of Pregnant Women 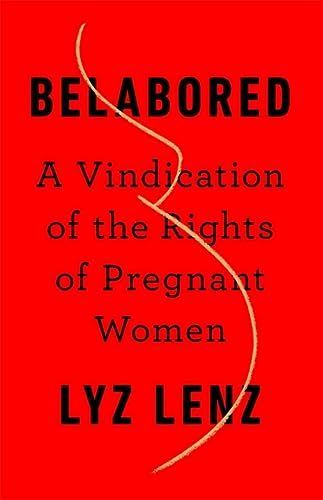 “Lenz deftly skewers all of the stereotypes around pregnancy and motherhood in her wonderful, must-read Belabored: A Vindication of the Rights of Pregnant Women.”

“To my children who ripped up my vulva on their way into the world.”

Wow, this is truly the book that vanquishes any of the BS around childbirth and pregnancy-at last. To all those mothers who say they can’t remember the pain of being ripped open during their nine- to 12-hour (or more) ordeal, Lyz Lenz calls bullshit in this remarkable book. She covers the gamut from access to birth control to unsolicited advice givers for pregnant women, and the horrible rate of maternal deaths. Belabored: A Vindication of the Rights of Pregnant Women couldn’t be timelier, because vice presidential candidate Kamala Harris campaigned for women’s rights in reproductive health and correcting the disparity in the highest maternal death rate in the industrialized world in the USA. Do we need more evidence that our nation doesn’t care about women?  Remarkably, Liz Lenz illuminates the darkest corners of America’s complete lack of planning or regard for pregnant women and their children with humor.

She slays public policies in states with abstinence programs which have the highest rates of teen pregnancies (Texas). Her verse on women who give birth in prison (usually for nonviolent drug or petty theft) are shackled to the bed and their children are stripped from them. These babies are then often lost to the system of social services as even short-term prison sentences are enough to extricate their unsuspecting children.” Mommy doesn’t’ love them” they are told.

“Shalon Irving was thirty-six when she had her first baby, worked as an epidemiologist for the Centers of Disease Control with a dual doctorate in sociology and gerontology. Upon discharge after the birth of her daughter Irving was concerned in only five hours because of fluid build-up and called her male doctor who told her to give it more time. She collapsed, was taken to the hospital, and was removed from life support a week later.”

Lenz correctly draws attention to the appalling fact that maternal deaths are on the rise in the United States, the country that spends more on healthcare than any other nation.  And worse yet the rate of maternal death is triple for black women, as Kamala Harris has stated.  Neel Shah, and obstetrician gynecologist at Beth Israel Deaconess Medical Center in Boston notes, “The common thread is that when Black women expressed concern about their symptoms, clinicians were more delayed and seemed to believe them less.

Lenz’s analogies to the expectation that much of society (men) have of women is to be loyal, blissful during motherhood, servicing humanity without complaint, or God-help-you need.

Even more depressing are the passages where Lenz details how mothers who are in job interviews are arrested because their children were unsupervised for an hour.

“To bear and to raise a child is a radical decision that can reduce us to poverty, ruin our bodies, and compromise our employment, earning potential, lives, and relationships.”

“To be pregnant, to be a mother, is to occupy a political space where your body is fought over and you feel powerless to control the conversation that rages around you.”

“Congratulations you are now more myth than human. These same people will go vote away your healthcare, your paid maternity leave, your birth control—all while calling you #blessed.”

Lenz deftly skewers all of the stereotypes around pregnancy and motherhood in her wonderful, must-read Belabored: A Vindication of the Rights of Pregnant Women.