Beirut 2020: Diary of the Collapse 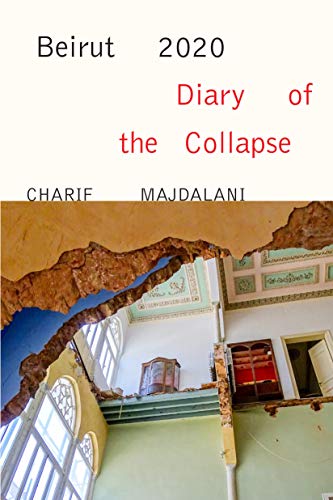 Charif Majdlani slays the profiteers of his beloved Lebanon, Hezbollah, Syrian military forces, warlords, and the ruling Muslim contingent equally in his courageous look at the city today. Lebanon, once the Paris of the Middle East, is a microcosm of the ills of cronyism politics, unregulated capitalism and disregard for environment, serving at the peril of its people as the canary in the coal mine for democracies.

“For several decades, they understood that a world where banks and the super-wealthy seek to manage the life of ordinary citizens by depriving them of any official recourse to government was a complete disaster on all levels-be it social, economic, urban or ecological.”

“The economic machine is breaking down, retail businesses are almost bankrupt, and yet the city has been seized by a frenzy of activity since this morning, just like in the glory days of its suddenly vanished opulence.”

“Lebanon, the arrogant little Switzerland that claimed to be the heir of an ancient or even biblical nation, collapsed for the first time in 1975, after thirty years that tend to be idealized today.” Just as the US had fled from the mess of the Vietnam War, the unending skirmishes in this fabled city were beginning.

Majdlani ascribes the second collapse of a functioning Lebanon acquiescing to oligarchs in the form of war lords and government administrators who pillaged the land and the resources of the city without return to its people. Today’s Lebanon seems to be composed of the rich Lebanese who have created a “little Switzerland” in the mountains and the denizens of a Palestinian existence for everyone else. The Saudis are the financial backers, and the Syrian militia the current unofficial occupiers of the land. The slow strangulation of the Lebanese people continues.

From an environmental standpoint the absurd aberrations from unregulated capitalism bequeathed modern Lebanon with individual exhaust spewing generators as the power grid is so unreliable. And the banking system is even worse, forbidding international transfers and limiting withdrawals from the middle class while allowing billions to be sent to tax havens for the uber rich. The “return of peace” led to deregulation, the legalization of anything that produced money, an eerie reminder of the robber baron billionaires in America.

Lest readers think this book is too dry, do enjoy Majdalani’s poetic verse, “A breeze wafts past from time to time, a crescent moon finer than a scimitar’s blade seems to be resting in the branches of the araucaria tree just across from us.” His imagery of an ancient stone stele and a sarcophagus being transported to the National Museum makes one feel a part of the landscape. Readers looking for humor may appreciate the reference to Noble Prize-winning Gabriel Garcia Márquez and the use of dried cow dung patties as mosquito repellant in the West Indies.

As the author snakes through his city, with trucks blocking the streets he ponders whether there will even be an adequate water supply for the summer. Like everything else in Lebanon trash collection and waste management have besieged the cliffs and collapsed into the sea along the coastline as Majdalani aptly describes, “with a smell that throughout the years has often spread over the towns and the whole seacoast like the malevolent spirit of a power that is rotten to the core.” No wonder the youth of this once promising democracy can’t wait to escape. As the US tries to right the nosedive from the climate-disaster-inducing Trump Administration, one wonders if it may be too late for once beautiful Lebanon, now only a figment of our imagination.

“In five seconds two hundred dead, one hundred fifty missing, six thousand injured, nine thousand damaged buildings, two hundred thousand homes destroyed, as well as hundreds of buildings including four hospitals . . .” Majdalani’s best words are found early on in this slim tome where he ascribes life for the Lebanese, “we were dancing at the foot of the volcano,” which seems an apt place to end.