Behind the Throne: A Domestic History of the British Royal Household 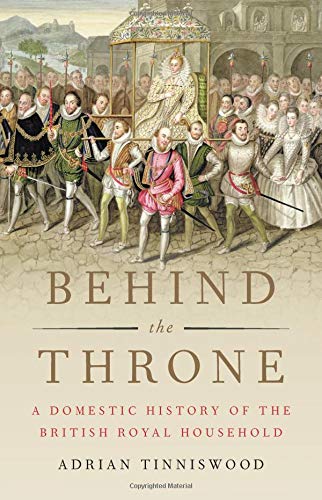 On June 21, 1969, an estimated three-quarters of the British population tuned into Royal Family, a fly-on-the-wall BBC documentary that captured the royals as surprisingly ordinary: the Windsors as the family next door. Philip and Anne grill sausages for an al fresco family lunch. Charles practices the cello. Elizabeth—using her own money—buys sweets for her four-year-old son Edward. Soon after this airing, Royal Family disappeared. Reportedly the queen, fearing it would strip the monarchy of its magical aura, ordered the film and its raw footage locked away in the Royal Archives, inaccessible even to serious researchers.

She need not have worried. Offsetting this two-hour film are hundreds of years’ worth of proof that the royals are different from you and me: centuries of royal performance establishing the majesty, mystery and grandeur—the aura—of royalty. That performance has involved a cast of thousands of royal servants, and it is their story that Adrian Tinniswood tells in his fast-paced and genially authoritative Behind the Throne: A Domestic History of the British Royal Household.

Covering 500 years—from the first Elizabeth to the second—and covering a retinue that always numbered in the hundreds (and now hovers at about 1200 souls), Tinniswood has his hands full. Most of the royal servants in this story remain anonymities, parts of the machinery—sometimes well-oiled, sometimes not so much—operating to satisfy the often-conflicting demands of the institution with the whims and crotchets of each passing inhabitant of the throne. Nevertheless, personalities do emerge, and anecdotes do abound.

The servants who do earn a name and a place in the index tend to be of two types. First there are the middlemen and middlewomen, the orchestrators of the monarchy, the upper-level servants responsible for translating the monarch’s will into the household’s action: Elizabeth I’s Lord Burghley, for example, Lord Steward in all but name, who wrestled for years, never entirely successfully, with the financial bloat of Elizabeth’s expansive household. Or the Duchess of Marlborough, upon whom Queen Anne showered high household offices—groom of the stool, mistress of the robes, and keeper of the privy purse—and whose impossible balancing act between the court’s highest servant and the Queen’s BFF ended in calamity and tears. Or, more recently, Commander Richard Colville, Elizabeth II’s first press secretary, who responded in 1955 to an epidemic of household disclosures to the press by inserting a non-disclosure clause into all royal household contracts. (It of course did not work.)

Then, there are the misfits, those personalities who seemingly failed to keep to their proper place as royal servants, whose stories tend to highlight the awkward or defective workings of the household. There are the royal fools, for example, such as Archibald Armstrong, fool to James I and Charles I, who successfully spoke truth to power for decades until he chose the wrong victim to mock: Charles’s favorite, Archbishop of Canterbury William Laud. For that, Armstrong earned abrupt sacking and exile from court. There are those too emotionally involved with their employers: Charles Fitzroy, for instance, equerry to George III and lover of his daughter Amelia. Amelia willed Fitzroy everything when she died, but her brothers made absolutely sure he did not get it.

A century later, Victoria’s favorites, John Brown and the munshi Abdul Karim, were seen as well to cross that emotional line in the sand—though Tinniswood makes clear that they were royal pets and not royal paramours. There were the malefactors such as the Lindsay sisters, whose alleged theft in 1844 of 21 pounds’ worth of royal linen exposed a chaotic royal household ripe for Prince Albert’s reforms, or Marion Crawford, once beloved governess to Elizabeth II, whose 1950 publication of gossipy but innocuous tales of the nursery ushered in the age of the royal tell-all.

Throughout Behind the Throne, however, the monarchs themselves remain the stars and dominant personalities: it is they, after all, whom the help exists to protect, to serve, and to promote, reign after reign. With 19 of them to cover, as well as one and a half interloping Lords Protector, Tinniswood is extremely selective—but intelligently so—in what he covers.

Some monarchs get very short shrift. (Sorry, William IV!) As for the rest, the stories of their reigns are limited to their most salient aspects—those situations in which the individuals most clearly shape, and strain, the institution: the first Queen Elizabeth’s cumbersome wanderlust, for example, which had her enormous retinue descending upon one magnate’s home after another, or her successor James I’s obsession with costly court masques, or the madness of King George III, or his son George IV’s problems with the wife he wanted nothing to do with, or, two hundred years later, the problems Edward VIII had with the woman who became everything to him.

While it’s clear, therefore, that there is more to this story than Tinniswood tells or can ever hope to tell, it’s clear as well that he amply, entertainingly, compellingly succeeds in making the case that when it comes to British royalty, it takes a village to make a monarch.