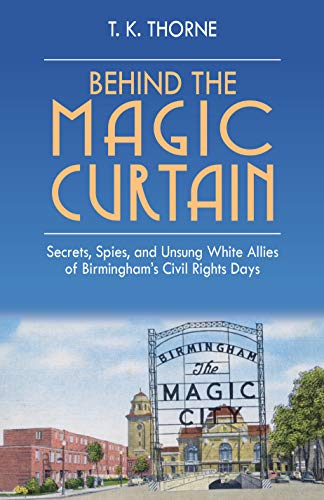 “an incredibly valuable, insightful, and instructive book . . . The multi-racial movement that emerged for the Black Lives Matter movement, with many anti-racist whites joining in support, is a reminder that there was a time when this was not an anomaly.”

During the civil rights movement of the 1950s and 1960s, Birmingham, Alabama, earned the name “Bombingham,” mainly for the 1963, dynamiting of the 16th Street Baptist Church, in which four African American girls were killed, an event that horrified the nation. Numerous bombings of homes and houses of worship bracketed the church blast.

But “the city seemed to go into shock from the church bombing,” writes T. K. Thorne in Behind the Magic Curtain.

The book’s title refers to Birmingham’s nickname as “The Magic City,” for its miraculous transformation from an agricultural center to a regional, industrial behemoth, producing steel from nearby mineral deposits.

However, with the church blast, Thorne writes, “The Magic City’s curtain had ripped apart.”

Two years earlier, Klansmen and others beat interracial Freedom Riders at the city’s bus station while police, who knew what the mob planned, were nowhere to be found.

“Much of the truth of Birmingham in the civil rights era is ugly, plain and simple,” Thorne writes. “This book is not an attempt to revise that truth.”

However, the book’s subtitle—“Secrets, Spies, and Unsung White Allies of Birmingham’s Civil Rights Days”—builds a persuasive case that the city’s white population was not monolithically opposed to racial equality.

“Reality was far more multihued,” she writes. “For whites in Birmingham, positions on race and segregation existed on a continuum that stretched from strident white supremacists who wielded bombs and murder to those who risked social and financial ostracism, even their lives, to meet in secret with Black friends and activists and take unpopular public stands . . . The majority of whites disapproved of Klan violence but stood against desegregation.”

This is a deeply rooted, insider’s examination. Thorne is an Alabama native, raised in a liberal Jewish home. As a retired Birmingham Police Department captain, she is uniquely positioned to tell this story, which follows her earlier nonfiction book, Last Chance for Justice, about the investigation following the 16th Street Church bombing.

Thorne tells the stories of heroes and villains, of the bravery, timidity, and cowardice of many people along the continuum between them.

While the story of Birmingham’s past has been told many times over the years, Behind the Magic Curtain gives the first book-length account for general readers of the lesser-known efforts of good-hearted and well-intentioned whites.

These included clergy and congregants from the religious community—led by Jews and Unitarians, unsurprisingly—attorneys, elementary and high school students, doctors, professors, department store owners, housewives, union leaders, and at least one home-grown communist.

Often at great personal cost, she writes, the most courageous of these “believed the moral obligation to right the wrongs of Jim Crow without delay outweighed the risks to societal order.”

Thorne maintains her perspective, and does not argue that these white allies, who risked social ostracism, economic retaliation, threats of beatings and bombings, made sacrifices equal to murdered civil rights workers of both races, many from the North. This honor roll of martyrs includes Andrew Goodman, James Chaney, Michael Schwerner, Herbert Lee, Viola Liuzzo, Medgar Evers, Jimmie Lee Jackson, and the Rev. James Reeb, among too many others.

A telling point in the book dispels the notion that those solely responsible for the white terror were knuckle-scrapping yokels armed with torches and pitchforks—and much worse—and cynical, opportunistic politicians like Bull Connor and Alabama Gov. George Wallace.

Thorne also points the finger of blame at the powerful, local economic interests known as the “Big Mules,” steel mill and mine owners used to running things in Birmingham. They recognized that a successful effort for civil rights would unavoidably lead to racial unity and political and economic empowerment, especially through trade unions.

Two of the key goals of the Birmingham movement were voting rights and equal pay for union workers, in addition to school desegregation, jobs, and equal treatment in the private sector.

Another fascinating aspect to the book is Thorne’s account of how moderate, civic-minded whites, along with those of the city’s Blacks who were registered to vote, carefully engineered a plan to change Birmingham’s city government. This quiet coalition was able to replace the three-commissioner, at-large form of government to a mayor-district council structure, with the goal of dislodging Conner from power. And it worked, ultimately leading to the first African American on the city council.

If this densely footnoted book has a weakness, it is that Thorne relies heavily on the witness of the late Tom Lankford, then a young police reporter for the afternoon daily, the Birmingham News. Promotional material for Behind the Magic Curtain describes Lankford as being “embedded” with local law enforcement.

A more accurate description is that Lankford was in bed with police. For a time he lived in the home of a Birmingham police detective. On his own, and at the behest of police, the reporter personally installed numerous eavesdropping devices and wiretaps on both racists and civil rights activists, including the Rev. Martin Luther King, Jr.

Lankford was a curious character, full of contradictions. His father was a small farmer turned cotton mill worker, who raised his family without racial prejudice, but never questioned segregation. While Tom was no activist for racial equality, on at least one occasion he got into a fist fight with a Klansman, whom he decked with one punch.

Incongruously, Lankford was friendly with George Wallace and Bull Connor, although the latter liked to describe Lankford’s employer as the “Jewish-owned, ni***r-loving Birmingham News.”

In her Preface, Thorne admits she was hesitant about using Lankford’s memoir and interviews in light of his “questionable ethics.”

Notwithstanding, Lankford’s ethically compromised role provided him with an invaluable insight into the workings of all of Birmingham’s players: the KKK and Nazis, civil rights strategists, moderates, and the police.

“His unique perspective and stories reveal an untold layer to historical events,” as Thorne explains her tradeoff.

This is an incredibly valuable, insightful, and instructive book, coming when it does. And it is not just a book about the past. The multi-racial movement that emerged for the Black Lives Matter movement, with many anti-racist whites joining in support, is a reminder that there was a time when this was not an anomaly.