Behind the Kitchen Door 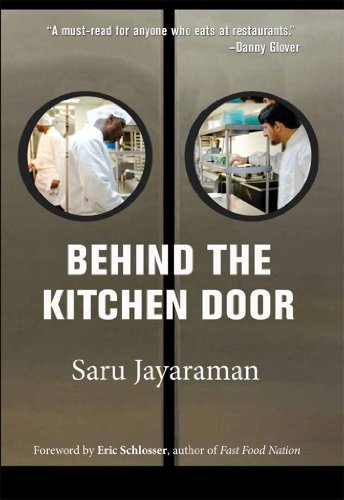 “Behind the Kitchen Door is an eye-popping book about restaurant industry practices that brings new meaning to the notion of ethical eating.”

One of the most pleasurable and frequent forms of entertainment we pursue is dining out, so to read a book that shines a light on rampant discrimination and unfair pay and labor practices in the restaurant industry is a real buzz kill.

Yet in the post Occupy Wall Street, post 2012 election world we live in, the subject of income inequality is gaining purchase in our collective consciousness. We can no longer ignore an industry that employs 10 million people but includes seven out of the eleven lowest paid occupations in America.

Saru Jayaraman is not a scold. Her purpose in writing Behind the Kitchen Door is not to make us feel guilty for not considering the workers when we enjoy a meal in a restaurant, but rather to raise our awareness and encourage us to act in order to improve the lives of those who feed us. She understands that we don’t enter a restaurant to seek social justice, but she does ask us to ponder what kind of society we are if we are more interested in the humane treatment of the animals we consume than the treatment of those who spend their days serving or preparing our food.

In her ten years as cofounder and director of Restaurant Opportunities Centers United (ROC) Ms. Jayaraman has worked tirelessly to improve working conditions and pay for thousands of restaurants workers who have come to her with their accounts of maltreatment. A handful of these stories provide the framework for Behind the Kitchen Door.

The stories themselves are often shocking and Dickensian-like—something that is hard to square in a 21st century United States given where we think we are in terms of labor laws, fair pay and antidiscrimination laws.

And yet it is so. The restaurant industry seems to be operating in a world that would not be unfamiliar to the characters in “Mad Men.” All you have to do is follow the money (the NRA is also the acronym for the National Restaurant Association).

There is story after story in Behind the Kitchen Door that describes stolen wages, ridiculously low wages, long hours, discrimination based on race or gender, and the absence of health benefits and sick pay. After awhile, all the stories begin to run together and the grinding circumstances of the workers may weigh you down. Perhaps that is the point. Fortunately, Ms. Jayaraman does not overburden us and keeps the narrative under 200 pages.

This is tough stuff.

It is also complicated stuff. Almost all of the stories in this book involve immigrants, both legal and illegal. Whatever your feelings are about immigration, you may have to put them aside to fully concentrate on the fair pay and labor issues.

Amazingly, Ms. Jayaraman manages to distance herself from the stories she tells, leaving it up to the reader to either be outraged or not. There are times when you wonder how she manages to hold her tongue, but her editorial distance adds weight to the import of the book and she is to be commended.

Of course the book is not all doom and gloom. There are some real bright spots out there that Ms. Jayaraman is only too happy to point out. Not all restaurant workers are abused or underpaid. There are owners who do pay their workers a living wage and benefits just as there are some states whose hourly minimum tipped wages are as high as non-tipped wages and whose restaurant industries are thriving. (It may surprise you to learn that the federal minimum tipped wage is a mere $2.13 an hour.)

Finally, Ms. Jayaraman offers an action plan for all of us dining consumers who want restaurant workers to be treated at least as well as the food on our plates. Not all of us will be comfortable with everything on her list. As mentioned earlier, we don’t go into a restaurant with social justice on our minds so there will be few of us who feel we can interrogate our server about how he or she is being paid or treated.

But what we can all easily do is write to our elected officials calling for an increase in the minimum tipped wage.

What’s more, we can choose to support restaurants that we know pay their workers fairly.

ROC publishes the ROC National Diner’s Guide that rates many restaurants in terms of how they treat their workers. It is easy to download from their website and will point you to many restaurants in your area where you can eat in good conscious. (And lest you think otherwise, the meal you enjoy at your local diner or pancake house is just as likely to be at the expense of the workers who serve you as the high-end restaurant in a major city.)

One final idea that was not mentioned in the book is to encourage food bloggers and restaurant critics to rate restaurants on their treatment of workers.

Restaurants pay attention to what the critics have to say and if they are getting rave reviews for their food but do not treat their workers fairly, you can bet they will change their ways.

Behind the Kitchen Door is an eye-popping book about restaurant industry practices that brings new meaning to the notion of ethical eating. As the second largest private sector industry in the United States better wages and fairer treatment in the restaurant industry could have ripple effects for workers throughout our economy. Food for thought.