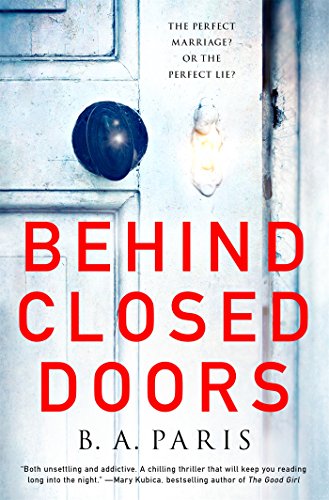 Jack Angel is a highly successful and charismatic attorney whose forte is dealing with domestic violence lawsuits. Grace Harrington is a buyer for Harrods who needs to travel frequently.

Eighteen months before, Grace met Jack at a local park where she was with her teenaged Down's syndrome sister, Millie. She immediately falls in love with Jack when he charms Millie by dancing with her. They begin a whirlwind relationship, and Jack totally captivates Grace by his consideration of Millie and his endearing treatment of her. She feels she is the luckiest person on earth.

Jack suggests Grace quit her job to marry him, so she sells her flat and moves into a hotel until their nuptials. Millie, the maid of honor, trips on the steps going into the church and breaks her leg. Their parents who have since moved from England to New Zealand accompany Millie to the hospital insisting they go on as planned.

Thailand is their honeymoon destination, and Jack's gift to Grace upon their return is a home he purchased for them where Millie will reside when she turns 18. Worried about Millie, Grace does not want to go, especially since she and Jack are now her legal guardians.

On the night of her wedding, Grace gets the surprise of her life when Jack leaves her alone. At first, she believes he is taking a call from work, but when he does not come back, she panics. In the morning, she receives a text from him ordering her to meet him in the parking lot. Bewildered, confused, and shivering, she waits for him to show up, arriving much later than promised. Jack finally demonstrates his true side as evidenced by the following:

"Get in," he said, picking up the cases and loading them into the boot.

I looked at him in amazement. "What do you expect? You disappear without a word, leaving me to spend our wedding night alone and then you turn up half an hour late to fetch me, leaving me waiting in the freezing cold! Surely I have a right to be angry!"

The nightmare begins. Like Dr. Jekyll and Mr. Hyde, Jack turns into the monster he  is, showing his true colors. Not allowing her to either see or contact her sister, he whisks her away to Thailand, where he locks her in the room. Beside herself with fear, Grace recognizes she needs to get away from this madman. But how?

She manages to break out and alert the desk clerk when Jack arrives and states his wife is suffering from emotional problems and has not taken her medication.

After being held captive for two weeks, she soon comes home to the beautiful house Jack bought. Now knowing the "real" Jack, Graces becomes more frustrated at her attempts to escape. With each endeavor, Jack punishes her, yet she realizes she must flee before Millie comes to live with them for Millie is Jack's intended target.

For a debut, Paris grabs the reader from the beginning with a powerful and electrifying tale. Behind Closed Doors, a novel sure to make one's skin crawl also reveals no one truly knows what does go on behind closed doors.