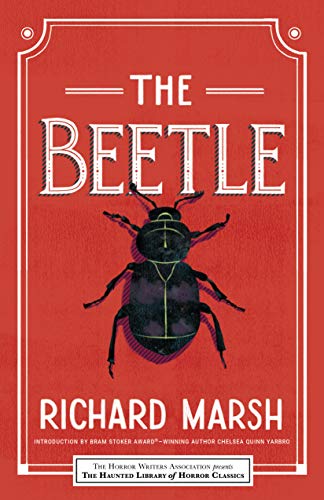 “The Beetle is a fine period piece, as well as an entertaining mystery that has withstood the test of time.”

It is late in the reign of Victoria and unemployed clerk Robert Holt is desperate. He’s penniless, hasn’t eaten in days, and there’s no room for him in the work houses. When he sees a partially open window in a seemingly abandoned house, he climbs inside, thinking of nothing more than shelter for the night.

The house isn’t empty, however, for an eerie creature lies within, an entity that robs Robert of his will.

“My condition was one of dual personality—while physically I was bound,  mentally I was free. But this measure of freedom on my mental side made my plight no better.”

Robert is sent to the home of Paul Lessingham, an up and coming young politico, to deliver a message containing two words: “The Beetle.”

“He retreated to the extremest limits of the room, crouching, his back against the book shelf in the attitude of a man receiving a staggering blow.”

Robert has now set off a chain of events. As he escapes from Lessingham’s home, he’s seen by Sydney Atherton, Lessingham’s rival for the hand of lovely Marjorie Lindon. When later he is freed from the creature’s clutches and collapses in the street, it is in front of Marjorie’s house. Kind as she is lovely, the young lady takes him in, calling for a doctor to treat this stranger, unaware that her kindness will bind her, Paul, and Sydney in a drama revealing a horrible secret and resulting in a battle against a supernatural force.

This synopsis hardly does the novel justice, for it’s truly an exciting story, but one that’s fairly complicated in the telling.

Published the same year as Dracula by Bram Stoker, but enjoying a much wider popularity at the time, The Beetle blends detective work with the threat of a Near Eastern cult, a love triangle, tossing in a bit of science to balance the mix.

The characters of the novel are well-delineated and, with the exception of the villain/villainess, are extremely likeable. Paul Lessingham is a prominent speaker in the House of Commons, working for the people, who, sometime in his extreme youth, made the mistake of going on a journey to the Middle East.

Sydney Atherton has known Marjorie Lindon all her life and has loved her just as long. She, however, never takes him seriously as a suitor. When Marjorie becomes engaged to Paul, he’s ironically drawn into helping because of his love for Marjorie. Some of Sydney’s asides and comments are sarcastic in the extreme, displaying acerbic wit and a sharp intellect.

Marjorie is depicted as a headstrong young woman who always gets her way. She also is rather oblivious to the fact that she has a bevy of eligible men running after her since she only has eyes for one. Her exchanges with her blustering father who can’t control his daughter are as sharp as Sydney’s and equally as amusing.

As does its companion publication Dracula, the story is told in the “journal-form” popular at the time, in four parts, so the reader is given Robert, Sydney, and Marjorie’s own version of the same events leading up to the moment when they all come together in their pursuit of the villain.

The fifth character, and the one concluding the story, is the Honorable Augustus Champnell, a young nobleman who has become a “Confidential Agent,” offering those finding themselves in awkward or dangerous situations a way out. Augustus is brought into the story when he’s hired by Paul Lessingham and from that point on, he takes over, bringing the tale to its inevitable conclusion.

Though there are many phrases within the story that are contemporary for the time and may puzzle some readers, this version is annotated with definitions and explanations to enable easy connotation.

The Beetle is a fine period piece, as well as an entertaining mystery that has withstood the test of time. It transfers to the 21st century with little trouble.

For those who like their mysteries with a Victorian flavor, filled with seemingly unconquerable villains, stalwart heroes, plucky heroines, staunch childhood friends, and a resolute private detective, this book is for you! The Beetle will also hold a special appeal for lovers of graphic novels such as The League of Extraordinary Gentlemen.

Presented under the Auspices of the Horror Writers Association, with an introduction by Chelsea Quinn Yarbro, The Beetle is a story that has survived a century and a quarter as a horror classic and is now being offered to a new generation of readers through Poisoned Pen Press’ Haunted Library of Horror Classics.