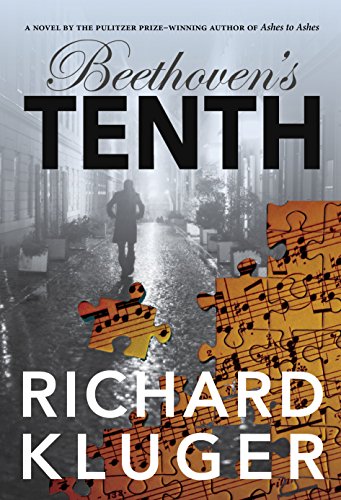 “For any who love Ludwig von Beethoven’s music, this novel is a must for its biography.  For everyone else, it’s a great mystery story set against a background of actual history.”

Mitchell Emery works for the New York branch of Cubbage & Wakeham, an international auction gallery, and has been asked to validate an item recently brought to them.

Jake Hassler, assistant manager of a New Jersey hardware store, had offered the gallery an original manuscript of a symphony, William Tell, Eine Dramatische symphoni. It’s not the subject that makes owner Harry Cubbage sit up and take notice, however. It’s the composer.

“His brain was clanging with all that titanic sound. All that Sturm und Drang. All that big hair. Just to conceive of a brand new masterpiece by numero uno, suddenly materializing from beyond the grave, was dizzying.”

Surely it has to be a forgery, for if it’s genuine, it’ll make history as Beethoven’s tenth symphony. Nevertheless, Mitch has questions. Why would Beethoven write a symphony based on a Swiss hero who is probably as much a myth as Robin Hood? It’s true he was in Switzerland for a while and his activities there aren’t documented, so it’s up to Mitch to determine the truth of Jake Hassler’s claim.

“‘It’s nothing personal. The laws and the professional ethics of our business require us to exercise what’s called ‘due diligence.’

‘I getcha,’ Jake said. ‘Bottomline, you guys gotta scope out  if I’m a sleazebag.’

‘Bottom line,’ said Harry and extended his hand to seal phase one of the deal.”

With wife Clara, Mitch travels to Switzerland, to the house where the trunk containing the manuscript was found. There’s already contention brewing. The Erpfs claim the manuscript because the trunk was in the house they own. Jake Hassler, who inherited the trunk from the uncle who rented the house, feels he’s the rightful owner.

Is it possible the Erpfs planted the manuscript for Jake to find, and the whole thing is a passive scam? If so, who exactly is involved?

Mitch’s findings are far-reaching and involving people he knows and considers his friends, people suddenly becoming very dangerous. There are threats and blackmail, and other discoveries: a suicide that may be a murder, a musical prodigy who is turned out of the Swiss Philharmonic and now see the manuscript as his way back in, and the Swiss and German governments are now getting into the act.

Just as Mitch feels he can declare the composition real, more questions pop up. How does the Tell manuscript relate to the opera Rossini later wrote on the same subject, with certain similar musical passages? Plagarism? On whose side? If the manuscript is Beethoven’s, why didn’t he allow it to be published, instead of abandoning it? Why did he consider it so “dangerous” that he ask that it be destroyed?

For any who love Ludwig von Beethoven’s music, this novel is a must for its biography. For everyone else, it’s a great mystery story set against a background of actual history.

Mitch and Clara make a great team. Their relationship has a certain Nick and Nora Charles quality in their exchanges of quips and retorts, as well as their obvious love for each other.

While definitely a mystery novel, Beethoven’s Tenth has the flavor of some of the better tales of espionage and intrigue, with an ironic ending worthy of Raiders of the Lost Ark.