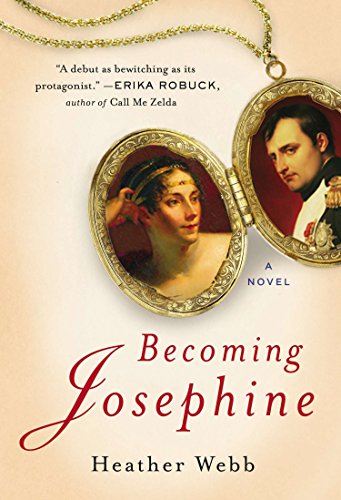 “Webb holds up a light into the inner recesses of a fascinating and contradictory woman . . . Becoming Josephine is an accomplished debut.”

The woman who would eventually become Josephine, Empress of France, Napoléon Bonaparte’s wife, started out life in a place and with a personality that seems counterintuitive.

Named Rose, born to an upper class but relatively impoverished family in Martinique, she is as a child both naughty and at least in her father’s view unattractive and unlikely ever to win a man’s heart.

The only aspect of her early character that clearly indicates her future self is her penchant for stealing kisses from unsuitable sweethearts. The details of Josephine’s life (she is renamed by Napoléon) are well documented. Instead of the public record, Webb has taken us inside her soul.

Rose’s childhood in Martinique flavors her life with a mysticism born of Tarot cards and a jungle priestess with “a fetish of an Ibo god dangl[ing] between her drooping breasts” who warns her of a marriage in a distant place which will come to a violent end and a fate in which Rose “will become more than a queen.” This world is a universe away from the Parisian world of her adult life.

Rose watches her parents’ unhappy marriage and her father’s constant philandering and decides marriage is not for her—but her parents declare otherwise, sending her off to Paris alone to marry a French nobleman named Alexandre. Alexandre tries to engage Rose in conversations about Rousseau and culture. She finds these topics boring and does not enjoy her tutor, meant to educate her properly in her husband’s view. Once again Rose is under the control of a philandering man who thinks very little of her.

We sympathize with her plight, but she isn’t yet a woman we admire. She strikes the reader as a bit shallow, quite taken with lovely clothes and jewels and easily duped by her deceptive husband. But that disobedient streak we saw back in Martinique will serve her well as she matures and learns to control her own destiny.

Webb has resisted hero worship—Josephine is a multilayered human being with more than her fair share of faults and shortcomings. She is redeemed by her loyalty, her gradually developing sophistication and her vast generosity.

When she succeeds in getting a formal separation from her first husband Alexandre, she sharpens her charm and uses it to win over wealthy men as lovers and protectors. She climbs high into French society on the strength of her beguiling personality.

Unfortunately, her separation does not grant her immunity from her husband’s political enemies. As the Revolution spirals into months of terror, Rose dares Robespierre’s fury by making appeals for her friends who have been thrown into prison on false charges.

But standing by one’s friends with such flamboyant courage is dangerous. When Alexandre is accused and arrested, she also must face life in one of the most notorious of those prisons. Even in prison—a strange, filth-ridden environment of illness and constant executions where prisoners intermix freely—Rose buoys her morale by taking a lover and, interestingly, becoming friends with her husband.

Rose’s singular combination of generosity, courage and romance is summed up by General Hoche, her prison lover: “You’ve endangered your life to help at least a dozen others here. . . . that’s honorable. No different from being a soldier.” Rose’s ability to forgive Alexandre for his cruelties and to see virtues in him even after the many mistakes he has made foreshadows her ability to live and flourish with the truly impossible and complicated Napoléon.

As Rose increasingly directs the course of her life, she wins our gradual admiration, although she continues to measure her own worth through the lenses of the men she pursues. She undergoes a surprising transformation toward the end, one as emotionally charged as the woman herself. Napoléon makes a complicated decision regarding his wife, one that is portrayed with all the nuance it deserves.

And from this experience Josephine uses her inner strength to go in a new direction. Heather Webb has given us a highly rewarding, wide-angle arc of a major portion of a woman’s life—with a twist at the end.

Becoming Josephine spans thirty years in its three hundred and twenty pages, and thus Webb moves us quickly through many events, contracting and skipping forward regularly. This brevity of treatment is an inevitable structural choice given the span of life Webb covers, and for the most part she keeps her audience closely engaged with vivid sensory detail and intense, close-in emotions.

At times, however, the narrative feels rushed. Two years in a return visit to Martinique feel like a visit of a week or two, for example. But this speed is also a strength because the plot does not get bogged down even when a less adept writer might have lost momentum.

Webb holds up a light into the inner recesses of a fascinating and contradictory woman—and through Josephine, Webb also paints a portrait of these years in French history, one that dips in alternating sweeps into sparkling splendor and darkest slime.

Becoming Josephine is an accomplished debut.