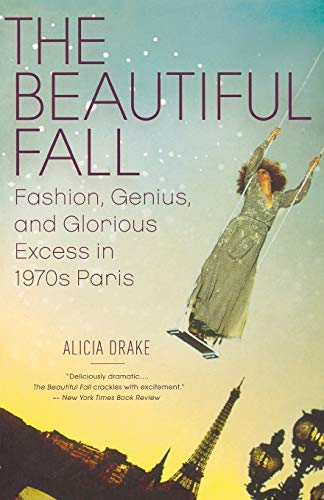 (Little, Brown and Company, September 2006) The Beautiful Fall has been classified “pop culture” but it is more much a chronicle of the parallel lives of two of the most famous designers of the 20th and 21st centuries. From the moment Yves St Laurent and Karl Lagerfeld stepped onto a stage together in 1954, the die was cast on the enduring and everlasting careers of these two designers. On that day in 1954 they were competing in a contest named the “International Wool Secretariat.” Yves was eighteen and Karl three years his senior and they were chosen from over three thousand applicants. At the beginning of their careers, they were friendly and often spent time together, but no one could have guessed the divergent as well as parallel paths that these men would embark on for over 50 years. Yves was the more introverted of the two, given to moods and inner demons, where Karl was the German spitfire who spoke rapidly and sketched constantly. The two men were polar opposites when it came to how they saw their work. Both were extremely talented from the very beginning, but Yves was more directional and evolving while Karl was of the moment: the newest, the latest, the greatest—each and every season. Yves would labor over the sleeve placement season after season where Karl would be deciding if it should be set in or raglan. Yves was the perfectionist of his art and Karl the revolutionary of his art. One of the turning points in Mr. St. Laurent’s early life was his appointment to be the successor of Christian Dior after Mr. Dior’s death in 1958; no one would have guessed the trajectory of this uber talented yet shy designer. Karl was never offered such an appointment and wasn’t really interested in perpetuating a look/name such as this. At this time, one more famous than the other, but both as charismatic as the other, had begun to form their own little cliques of followers. Yves not only found a few core admirers—who would remain with him till death—but he also found his future business partner and life partner (Pierre Berge). Karl’s entourage was like his design philosophy: more of the moment, his attention span was never the same nor were his needs. Ms. Drake takes us into the groups, into the mindsets of these famous designers and into the needs that each of these groups satisfied for each designer. She has also given some enduring visuals as to how these men portrayed themselves from the 1950s through the new millennium. She was allowed almost total access to Mr. St Laurent and associates, while Mr. Lagerfeld was far more guarded—as he remains to this day. The 50-year span of their love/hate relationship is chronicled for our examination and analysis by this insightful writer who has definitely placed her allegiances with the St. Laurent camp. She, however, reports rather than opines about them and lets their confidantes do that for her. The book is a must-read for those with any curiosity about the fashion business, Paris during that time span, or the egos of such great designers. Ms. Drake also provides us with the lingering insecurities that most would never imagine in such great figures, ones that have remained with them all their lives. Ms. Drake currently resides overseas and contributes to various fashion and lifestyle publications. Reviewer Jeffrey Felner is a columnist in Woman 2 Woman Magazine: Fashion by the Rules, and continues a long and successful career in jewelry and fashion design and merchandising.