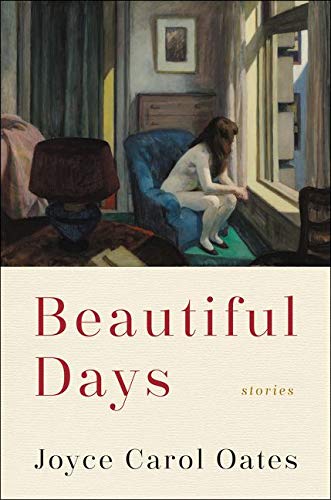 The stories in first half of Beautiful Days are character and relationship driven. The majority of men (though not all men), are selfish and mean, the majority of women (though again, not all women) are insecure and romantic. The stories in the second half of Beautiful Days are more plot than character driven and (with one exception) fit the stylings of gothic horror, and would not be out of place in the television series created by Rod Serling, The Twilight Zone.

The first story, “Fleuve Bleu,” is the name of a town in small-town upstate New York that sits on a river of the same name. The story is a character study of a high-status man and a low-status woman who are both married but not to each other. They embark on an affair of some duration told from the man’s point of view. “The randomness of it, love as haphazard as playing cards blindly dealt.” The hook that keeps the reader interested is a relationship that changes over time with promises made, and promises kept, and not kept, and secrets as to why.

“Big Burnt” takes place on an island of the same name on Lake George, also in upstate New York. This story also is character sketch, this time of a selfish, mean man and a insecure and romantic woman. The man has planned his own suicide (to be carried out after a camping trip with the woman on Big Burnt) in such a manner as to cause as much emotional damage to the woman as possible.

The hook of the story for the reader is the many retreats and advances along the way. Will he or won’t he go ahead with his plan? Might he fall in love? “For the past two and a half days the woman had been calculating how to make the man love her. The man had been calculating how when the interlude at Lake George was over, and he’d return to his home alone in Cambridge, he would blow out his brains.” The obvious analogy is that of the cartoon strip Peanuts with author Oates as Lucy repeatedly pulling the football away from you’re the reader as the ever naïve, ever hopeful Charlie Brown.

“Owl Eyes” is another character sketch. In this story Jerald is a strange and immature high school junior. Jerald has been raised by a fearful and isolating mother; his father is absent and his father’s absence is unexplained. Jerald enrolls in a six-week summer class on advanced calculus at a near but not too near college. Jerald’s mother tells him before allowing him to attend, “You must not fail, Jerald. You must not embarrass us.” Jerald commutes by train to the college campus where he meets a stranger who seems to know him and who can answer questions about his past, but only if Jerald is brave enough to ask.

“Except You Bless Me” is a character sketch centered on a fraught student-teacher relationship. This story explores race relations, high-status low-status relations, and student-teacher bonding (or in this case almost but not quite bonding). The story is constructed by use of short vignettes that are separated by years. The take-away is the human condition of the need to connect, yet failing to connect, and the aftermath.

“The Quiet Car” is another character sketch, this one about a mean male academic on the waning edge of a mild success and the start of his descent into irrelevance. In flashback he reveals himself to have been a mean jerk on the way up, continuing to be a mean jerk on the way down. The end may be intended to provide an emotional release to the reader—the mean jerk gets his comeuppance. However, given the strength of the academic’s meanness and jerkiness over the years and the surprisingly mild rebuke given at the end, this is story nowhere nearly enough packs the emotional punch and recovery as A Christmas Carol.

The driving force behind “The Bereaved” is the sad, accidental death of a troubled adult child. In this character sketch the father is an emotionally isolated academic, and the adult child is from his first marriage. The point of view is from the second wife, who is much younger than her husband (who is the child’s father). The second wife was at one point the academic’s student (leading to divorce), and who later did her best to raise a difficult child to adulthood. However any empathy that might have been given to the second wife is quickly erased when her mean streak is revealed. The marriage is strained and the reader wonders, will the aftermath of the child’s death the final break in their relationship, or are these two meanies meant for each other?

The second section’s first story, “Les Beaux Jour (Beautiful Days)” is a gothic tale with a portal to horror that is accessed through a painting in a museum. This reviewer will not add more. Except with this single quote, “Will they not hear me when I cry for help?”

The next story “Fractal” is another tale of horror, this one a stylistic mashup of Kafka, Borges, Danielewski, Stephen King, and Schrodinger’s cat. The plot concerns a precocious child, who with his mother travels to visit a fractal museum placed in Stephen King’s Maine. The melancholy tone becomes more and more despairing and sinister with each turn of the page. The museum hosts a maze, a Sierpinski labyrinth that changes not only in physical form but also in time, creating a new world with each path the boy choses. The child enters the maze (his mother is forbidden entry by her son) but (possibly) does not reach the exit. He does not reach the exit because: he’s died a horrific death, or at exit he has aged to the point of not being unrecognized by his mother. The mother, not seeing her son exit is then prevented from entering the maze by the gatekeeper. And while waiting at the exit, the mother may or may not be losing her mind. “Go Back. This is wrong. It is not too late.” But it is too late. “He is gone gone gone. You have lost lost lost him. You are damned damned damned and this is hell hell hell.”

“Undocumented Alien” is about an illegal alien who in exchange for not being deported after capture accepts a brain implant. The implant is surgically installed by a shadowy government agency, and its intent is to confuse time-sense of past, present and future. The experiment is reminiscent to a similar one performed on Slothrop in Pynchon’s Gravity’s Rainbow.

To what purpose this experiment is conducted is not explained (in either story). The shadowy government agency researcher writes in a report, “Inevitably, the test subjects had no way of exercising any residue of a natural sense of space and direction for they had no more information about where they were than blindfolded children forced to turn in circles until they were dizzy and in danger of fainting might have.” The implant slowly malfunctions, driving the subject first to a state of agitation, then to act out in violence to the consequence of being killed by police.

“Donald Barthelme Saved from Oblivion” is not a horror story. In this “story,” Oates writes in Don Barthelme’s style to describe Don Barthelme, and the effect is an over-the-top caricature of the story’s subject who does and says manic, silly things. The “story” consists of a rapid-fire stream of terrible jokes, puns, alliterations and non-sequiturs. The overall effect is quite charming in a Marx brothers at the Opera sort of way. For readers who are unfamiliar with Barthelme, Wikipedia tells us, “Barthelme's fiction was hailed by some for being profoundly disciplined and derided by others as being meaningless, academic postmodernism.”

The final story in Beautiful Days, “Memorial Field” has a horrific and nightmare-like plot based on the adage, let the punishment fit the crime. In it a retired, ailing ex-president is remanded from his hospital bed to fulfill a court ordered punishment, to dig up and be photographed beside to the bodies of those whose deaths for which he has been held responsible. As for his ex-staff, the ex-president calmly informs the reader, “My staff and my aids have been executed, and for these innocent men there can be no appeal.”