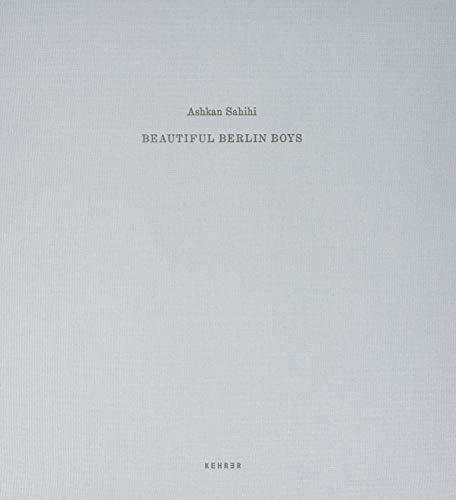 “Beautiful Berlin Boys by Ashkan Sahihi resounds as an affirmation of the beauty and individuality of the gay man.”

Ashkan Sahihi is no stranger to the concept of the photographic series. In the past he has done series of drug users, female IDF (Israeli Defense Forces) soldiers, and Guantanamo Bay landscapes. His latest photographic series is called Beautiful Berlin Boys. Published by Kehrer Verlag, a German publisher specializing in the photographic arts, Mr. Sahihi offers twenty male nude studies. Set against a blank white background the subjects range in body type and demeanor. Mr. Sahihi, an Iranian-American, sees this series as a reflection of his time in Berlin in 2013. It reminded him of his earlier years in New York City at the height of the AIDS crisis.

“These young men—boys in my eyes—have come to Berlin for the same reason we all gathered in New York: in hope of becoming their own sovereign beings,” he says in his Artist’s Statement. “Like anywhere else in the world, Berlin faces increasing pressure from a right wing that asserts its so-called values through force and physical assault.”

The plain white background and casual poses of the photographs doesn’t bespeak any overt political message, at least on a surface level. But Sahihi’s playful alliterative title and sympathetic eye lead to historical and cultural associations. While the male nude has been part of the Western artistic vocabulary for thousands of years, the male nude in photography has special resonance in the gay experience. Robert Mapplethorpe, Tom Bianchi, and Herb Ritts all celebrated the male nude in works of varying degrees of homoeroticism.

Sahihi’s nudes bring forth associations ranging from the classical nudes of Michelangelo and Raphael to Berlin’s place in gay history, specifically the Weimar era. The book’s white space isolates the images, creating a sanctified protected territory. Wide margins surround each photo and the verso is blank. If so desired, the photos could be cut out from the book and framed. (The physical book is oversized.)

Each nude study reveals a different individual. Oliver is slender and slightly effeminate. Arms crossed behind his back, he looks downward, possibly deep in thought. Ralph has large earrings and a short Caesar haircut. His shoulders and arms are covered in tattoos. He also looks away, his gaze to the left of the page. All the subjects have frontal poses except one, an individual named Ruby. Why the turn away from the camera? It is never revealed. Should it be? Is it necessary? Questions arise from contemplating these photographs, these subjects, these individuals. Although the nudity strikes the gaze almost immediately, the eyes quickly meet the eyes of those photographed. It is person-to-person contact facilitated through art.

A dwindling demographic seeks to legislate, imprison, or slaughter those they find morally repellent. Beautiful Berlin Boys by Ashkan Sahihi resounds as an affirmation of the beauty and individuality of the gay man. Each man stands before the viewer in the ultimate expression of human vulnerability. The twenty nudes assembled don’t necessarily stand in proud defiance, but provoke questions and personal reflection. Ashkan Sahihi has created a work of uncompromising integrity combined with brevity and stark beauty.