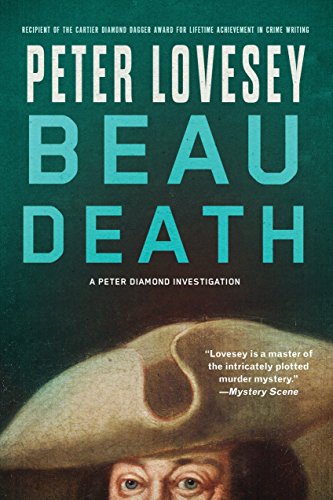 “Step back a moment into history as a contemporary detective investigates a death perhaps occurring two centuries before . . .”

It’s an ordinary day in Twerton, a southwesterly suburb of Bath with a demolition crew taking apart a condemned house—ordinary, that is, until the wrecking ball takes out the attic, revealing a skeleton sitting in a chair.

“In the attic, now ripped open, was a crumpled figure in an armchair. It was a parody of the human form held together by what appeared to be long outmoded garments: olive green frock coat, cravat, grey breeches, wrinkled white stockings. The head, partially covered by a long black wig, was a skull, and the hands were skeletal.

He was spectacularly, irreversibly, abso-bloody-lutely dead.”

No one has any idea who the chap is, of course, but the fact that he’s dressed in authentic 18th century clothing, including a white tricorne hat and a black wig, leads a few people to wonder if perhaps the body is that of Richard “Beau” Nash, the master of ceremonies who made Bath famous.

Called to the scene complete with medical examiner to declare the body officially dead, Detective Peter Diamond has himself an intriguing case.  How does one determine an identity from mere bones? If the body is indeed over 200 years old and foul play is discovered, how can the killer be apprehended at this late date?

“‘I just came out of a meeting with the ACC and she has instructed us to investigate the death of the skeleton in the loft.  If, like me, you’re thinking we’re about three hundred years too late, then think again. She wants results.’

‘What kind of results?’ Halliwell asked. ‘We’re not going to find his name.’

Negativity from any of them would have been deplorable, from his deputy, it was a shock.

“Get on with it, all of you,” Diamond said. ‘We haven’t searched his pockets yet.’”

With the aid of Paloma, Diamond’s friend and lover, Peter learns the clothing the skeleton wears is indeed authentic. Delving into Beau Nash’s background uncovers plenty of discrepancies between his biographers’ facts and his actual death, especially where he was buried.

When a second death occurs, this one contemporary, a shooting of the impresario of an international fireworks competition, there’s obviously no connection to the “Nash” slaying.

Gathering all the threads and weaving them together leads Diamond on a merry chase as he goes from the Beau Nash Society, whose members dress in 18th century clothing and dance the minuet, to a titled millionaire showing up at the scene shortly after the body’s discovery, to squatters with enough legal knowledge to manage living rent-free for years in a residence, to a very present killer in today’s society.

Diamond finds one theory after another quashed, but even with a shortage of manpower divided between two crimes, the detective may soon discover one lead to the other, and the long-deceased Beau Nash may be partly to blame.

“It was one diabolically difficult cryptic challenge, with the difference that the clues weren’t conveniently listed and numbered. He had to find them and when he got that far in the cryptic crossword puzzle, the obvious answer was likely to be a distraction. You had to spot the real meaning behind the words, filling the gaps down and across with confidence. The demon who delights in tormenting detectives had struck a match and held the flame to the whole puzzle.”

This is a lively British police procedural. Those who have heard of Beau Brummell but not his contemporary Beau Nash are in for some interesting as well as entertaining history, both of Beau himself, as well as of Bath, the construction of 18th century men’s clothing, and the legalities of someone other than the owner occupying an empty building.

Though there’s a good amount of British slang, it’s easy to discern the meanings from the context, so the reader won’t go ignorant for long.  Similarities and differences between American and British police procedurals as far as how the authorities go about it will also be noted. The various idiosyncrasies and quirks of Diamond and his contingent, while offering amusing moments and individualizing each, also underscore how those same characteristics enable them to discover the identity of the body as well as its killer.

The history buff will appreciate the research done on Beau Nash’s life and times, as well as the mystery of his death and burial place, in giving the story’s setting an air of authenticity. Beau Death may not having the gritty feel of a crime noir nor the violence of some American mystery novels, but it’s rather easy going and gently acerbic narration, and its cast of occasionally eccentric characters is nevertheless as tense and thoroughly intriguing in its own way as any 87th Precinct novel.