The Beatles Were Fab (and They Were Funny) 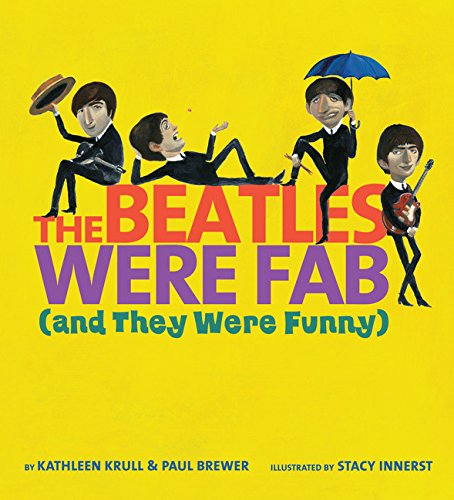 “. . . as sweet and as filling as the jelly beans fans flung at the Beatles.”

Give it up, you baby boomers. You had a favorite Beatle, didn’t you? You cherished some bubblegum card or poster or magazine photo because it featured John or Paul or George or Ringo.

Veteran children’s nonfiction writer Kathleen Krull has teamed up with her husband, author/illustrator Paul Brewer, to bring the band back to the spotlight for a generation too young to have experienced Beatlemania in all its craziness.

“From the time they got together as lads until they became superstars, the Fab Four made music, made history, and made people laugh,” the authors relate on the picture book’s first page. That last component—the band’s sense of humor—supplies a creative spin on the oft-told history of the iconic band that blew in from Liverpool and swept the charts here, there, and everywhere.

The authors adopt a breezy, lighthearted tone throughout this spirited romp through Beatlemania. They employ a bevy of jokes, quips and quotes to show how the Fab Four relied on humor to help them cope with life’s highs and lows.

Entertaining quotes from each musician advance the story and reveal the quirky charm and resilience of each musician. Although adoring fans and ambitious reporters impinged on their private lives, the Beatles showed remarkable creativity in dealing with pesky people.

The authors devote a page of engaging Qs and As culled from interviews with each musician. We learn, for instance, that when a journalist told John, “Some people think your haircuts are un-American,” John replied, “Well, it was very observant of them, because we aren’t Americans actually.”

When someone asked Paul, “Is your hair real?” he inquired, “Is yours?” George told a reporter if he stopped being a Beatle, he might “train elephants in the zoo.” And in response to the doltish question, “How did you find America?” Ringo quipped, “We went to Greenland and made a left turn.”

The star atop such quips is Stacy Innerst’s acrylic paintings full of personality, redolent with thick brush strokes, and rich with relevant details. Mr. Innerst, who illustrated the writing team’s Lincoln Tells a Joke, again shows what it means to be in synch with the authors’ intent.

Early in the story, Mr. Innerst shows readers a drum sporting the goofy names the band considered before choosing the one that made them laugh. As the authors describe the band’s heady taste of fame, the illustrator depicts a chunky golden hit machine with 45s popping out of a funnel, one smash hit after another.

Later, on the page relating their wildly popular 1964 American tour, Mr. Innerst shows a huge black guitar case displaying the names of the cities where they performed. On top of the curvy case, the Beatles whiz along in a miniature roller coaster.

Such touches go a long way in adding crowd appeal to this confection, as sweet and as filling as the jelly beans fans flung at the Beatles. A timeline and bibliography serve to direct young fans to more substantive sources.