The Beat Goes On: The Complete Rebus Stories 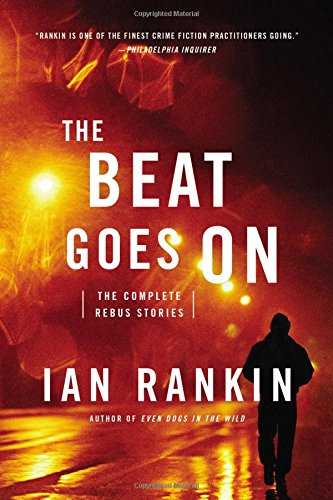 “As with the rest of Ian Rankin’s literary efforts, The Beat Goes On earns five stars out of five.”

Scotland’s most famous, irascible, and cranky detective is back in a short story collection that covers his decades as a copper in Edinburgh. Published intermittingly in crime magazines, these stories are collected in a single volume, including two never before published.

From Rebus’s humble beginning—if John Rebus is ever humble—in “Dead and Buried” to his last case—or not—in “The Very Last Drop,” Ian Rankin catalogs Rebus’s career in a collection that will please his fans and temporarily  satisfy them until the next full-length novel appears.

In Mr. Rankin’s economical style, in which not a word is wasted, each story illustrates the many-sided facets of John Rebus’s character. In “Dead and Buried” it is John Rebus’s curiosity over what an old pocket watch buried with the last man executed in Scotland.

Curiosity, another copper tells Rebus “that’s a dangerous trait in CID. You might want to get shot of it.”

Of course, warning Rebus to avoid anything, even curiosity, is like waving a red flag at a bull; Rebus sees a warning as a challenge. He delves further into the case of Joseph Blay, Scotland’s last hanged man, to discover the truth of his guilt or innocence.

Rebus’s curiosity and obsession with learning the truth leads him to question the guilt of a man accused of brutally stabbing his girlfriend in “Playback.” It was the perfect murder in that the defendant had called police to confess, then panicked and ran only to be arrested leaving the scene of the crime.  An open and shut, slam-dunk case except the defendant now says he is innocent.

In “Seeing Things” Rebus must separate the religious from the secular when three schoolgirls claim they saw the figure of Jesus, bleeding from his side, leave a bloody handprint on a tree in the Hermitage, a wild park land in the middle of Edinburgh. The Catholics claim it is a miracle while the more stanch Protestants call it “Popery.”

Rebus is skeptical. “Rebus liked to think of himself as a Christian, albeit with too many question and doubts to ally himself with either side, Catholic or Protestant.” In a brief narrative Mr. Rankin reveals Rebus as pragmatic, not a true believer, but not an atheist, either. Kudos to Mr. Rankin for discussing religion in a common sense manner that may make neither side happy, but doesn’t stir up controversy that will detract from the story.

As tough and hard and as sure of himself as Rebus, even he can second guess himself. In “Sunday” Rebus spends his Sunday reliving his Friday night during which he had killed a man. This story reveals Rebus’s vulnerability to self-doubt and guilt in a few pages.” Thinking about it would do no good, but it was the only way to deal with it. . . . But he would stop feeling bad, and then eventually he would stop feeling anything at all.”

The Beat Goes On by Ian Rankin is the consummate short story collection in that each story adds another layer to the character of John Rebus. Even those who do not particularly enjoy reading short stories, finding the literary form too brief and not detailed enough, will love this collection. Each story is more like a chapter in the life of John Rebus, rather than a vignette.

As with the rest of Ian Rankin’s literary efforts, The Beat Goes On earns five stars out of five.