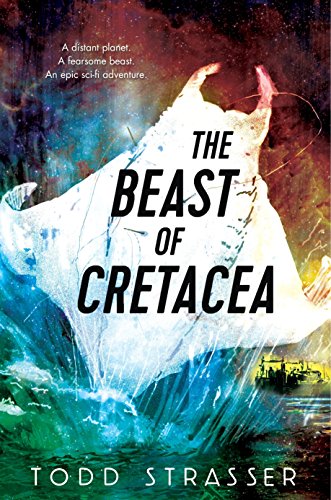 Earth is dying, nearly devoid of oxygen and water. Forests are gone, oceans a half-forgotten myth. Clots of humanity struggle to survive on Natrient, a foul-tasting food replacement genetically engineered from animal flesh clawed from the waters of Cretacea, one of the feeder planets that helps to sustain the crumbling human race.

Ishmael enlists for a year-long mission on Cretacea to earn money to pay for his foster parents to leave Earth. When Ishmael awakens in a stasis pod aboard the Pequod, the fresh air, blue sky, the sun, and the endless sea astound him.

But he’s not here to see the sights. He’s here to work, to risk his life hunting down and harvesting the ocean-beasts for Earth. Humanity's only hope for survival is resource mining and colonization of distant planets such as Cretacea. Or so he’s been told. So he believes. For many things are not what they seem.

The names of Ishmael’s crewmates may sound familiar: Queequeg; Starbuck; Tashtego. And Ahab, Captain of the Pequod. While the ship resembles a derelict whaler, it’s nuclear-powered, complete with long-range drones and electronics. Young readers don’t need to have read Melville’s Moby-Dick to keep up with the story, but those familiar with the classic will enjoy the juxtaposition of old and new.

Soon, through luck and hard work, Ishmael and friends, Queequeg, Gwen, and Billy are assigned their own chase boat. Plenty of easy prey abounds, such as the “humps and small terrafins,” but Ahab orders the chase boat crews to ignore those creatures and instead, to chase the elusive Great Terrafin. This creature—as pictured on the book’s beautiful cover—is perhaps some sort of giant manta ray. It cost Ahab his leg and his first boat, the Essex, years ago , and he’s determined to get his revenge.

Strasser tells his story with an unusual third-person, present-tense voice, which at times, makes the story seem more like a narrated documentary film than a novel. Yet the story rips along at a faultless pace, thrusting us into the middle of high-seas adventures, pirate attacks, captures and escapes, storms and shipwrecks, an innocent island populace, and spectors of dark secrets circling ever closer.

The characters are finely wrought, from Ishmael and his friends; to Charity, the Pequod’s stasis tech; to Tarnmoor, the old blind sailor who survived Ahab’s first encounter with the Giant Terrafin. We learn of Ishmael’s true past slowly, through flashbacks and hints dropped by Pip, a member of Earth’s Gilded who has joined the voyage out of boredom (he says).

Events careen toward a conclusion that must be read to be believed. No spoiler alerts here. Even readers who often predict a story’s ending are very unlikely to guess all the components of this grand finale. Offering hope and a chance to put things right in the midst of devastation, Ishmael, Queequeg, and Gwen set off together on an even greater adventure.