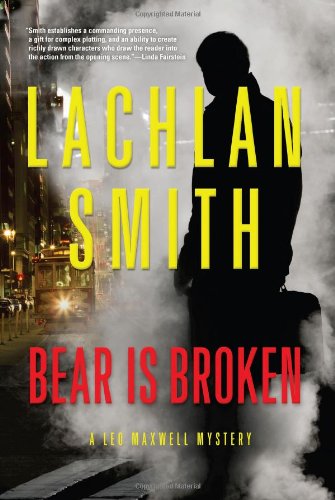 Bear Is Broken is a Leo Maxwell Novel set in San Francisco. The story takes place in 1999.

Raised by and always overshadowed by his brother, Leo has followed Teddy into the legal profession. Having just passed the California State Bar, he now shares a corner of Teddy’s desk.

The story begins with a domestic violence trial about to conclude. With closing arguments due later in the afternoon, Teddy and Leo take a break and go to lunch. Minutes after their arrival at the restaurant, an unidentified male approaches and shoots Teddy in the head. He escapes before Leo can react.

As Teddy hovers near death, Leo decides to deliver the closing arguments in his brother’s place. Leo must also consider Teddy’s grim prognosis, and the fact he may soon face a life-ending decision. But first, he intends to find the shooter and starts by probing into all his brother’s cases.

What follows is an intricate series of events that lead Leo to several promising suspects. The police, however, want to hang it on their own suspect: a client of Teddy’s who shot and killed two police officers.

Each step in Leo’s investigation yields unpleasant discoveries. He learns that Teddy kept secrets, including contact with their father, imprisoned for murdering their mother. To get to the truth and understand what happened, Leo must also overcome his own longstanding insecurities and prove himself as a lawyer.

The author uses his own experience as a lawyer to deliver an excellent drama. The main character shows weakness in his mistakes, yet draws from them to sharpen his instincts. As he moves out from his brother’s shadow and pursues his brother’s enemies, Leo puts his own life at risk, uncovering more about Teddy. He is also plagued by memories of his mother and learns unsettling information about her murder.

Bear Is Broken is the first in a planned series and is an absorbing debut novel. The pace is fast and energetic. The pages are filled with good suspense and interesting characters.

As the book concludes, the author bounces between suspects and this may present some readers with a challenge; however, the main plot and the subplots are gripping. Bear Is Broken is an exciting read.