The Beach at Painter's Cove: A Novel 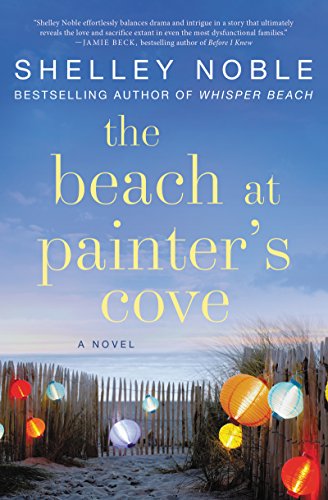 Every family member shares some of the same personality traits, as is with the four generations of Whitakers. The matriarch, Lenore (Leo) and her now deceased husband Wes along with his sister Fae for years hosted galas at their extensive mansion set on the Connecticut shore. With Wes's passing the two reclusive women depend on Leo's grandson-in-law to handle finances.

Wes and Leo parented George, who disappointed them by not following their artistic proclivities and Jillian, a well-known actress. Another son, Max perished while serving the country in war. George is aloof and standoffish, wanting nothing more than to shove his mother and aunt into assisted living. He will not forgive his father for handing over the estate duties to his Dan Barrister, his niece Vivienne's husband.

Jillian dropped her young daughters, Vivienne and Isabelle (Issy) at the Muses by the Sea, her parents’ compound, when she became famous. Jillian's abandonment rankled the sisters, making their relationship chilly at best, mirroring their feelings toward their mother.

Vivienne is only interested in status and what money can buy. Things go awry with her marriage, and she dumps her three children with Leo to search for Dan who has gone missing. Her offspring, Stephanie, embarking on the teen years, is sullen, whereas younger Mandy takes after her mother by being a drama queen; Griffin, the youngest, is bewildered and cranky by being deserted.

When Leo ends up in the hospital after a fall, the police contact Issy as to the welfare of the children. Issy, a workaholic, designing museum sets for a Manhattan firm is baffled, not realizing the youngsters are at the shore, and also upset about Leo's health. She rushes to the home she hasn't visited in years, dumbfounded to realize her sister pulled her mother's act by leaving the kids in Leo's care.

As Issy reunites with her beloved grandmother and colorful, yet eccentric aunt, she's wrenched in several directions. Why did Vivienne take off after Dan, and where did he go? How can she attend to the nieces and nephew she doesn't know, especially when her job is calling? But more important, how can she help Leo and Fae whose once palatial home is falling to ruin around them?

Issy phones Jillian with whom she is estranged hoping to attain some funds after learning the family is destitute, but is shocked to hear her mother is penniless:

"It pushed Issy right over the brink. 'I'm not bitter, I'm pissed. I haven't asked you for anything in twenty-four years. And when I finally do give in to ask for a loan—a loan—so that your mother and my grandmother can stay in her own home after my sister—that's your other daughter—robbed her blind. What do I get? You. Broke? What if I hadn't called? Who would you have sponged off then?'"

Each well-defined player displays distinct traits setting them apart from the others, yet they prove to be alike in many ways:

Leo spends most of her time living in the past, communing with her dead husband and son, though she is not maudlin.

Fae, an unconventional and fascinating individual, lives in a fairy tale, wearing multicolored clothing and drawing her magical stories on the town sidewalks.

Jillian is selfish and narcissistic, and her celebrity status waning as she's aged causes her to seek out the generosity of different men.

Vivienne, self-absorbed like her mother, blames everyone for problems she faces, chiefly by denigrating Issy.

Issy carries the burden of believing she's been unwanted all her life, though Wes, Leo, and Fae showed her unconditional acceptance. She buries herself in her career with no attachments so she cannot be further wounded.

Stephanie is on the cusp of becoming a young woman and despises her situation, showing scorn to everyone until Fae takes her under her wing with her mystical tales, and Issy displays love and kindness.

A story built on frustrations, insults, and loss, The Beach at Painter's Cove offers a poignant, thought-provoking family saga with each player well described both in the physical and emotional sense.

The locale illustrates a charming, yet rundown backdrop for what once was the site of a captivating manor of the wealthy and illustrious. References to artists and performers, along with a portrayal of the local ecology provide much more than a broken family that needs to come together. Well-written and character driven, The Beach at Painter's Cove juxtaposes the differences and similarities between generations.