The Sea Beach Line: A Novel 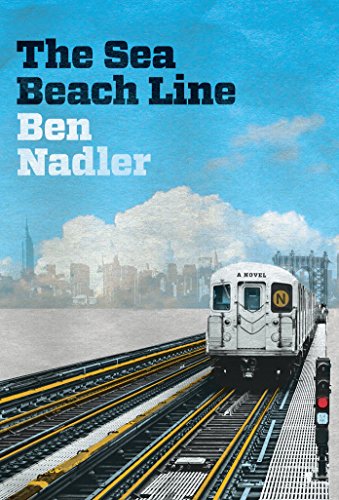 A small-time gangster who has disappeared and may be dead. Hasidic folk tales. A yarmulke-wearing Oberlin College student expelled for drug dealing. Hedge-fund fraud. A young man’s search for his father. An ultra-Orthodox Jewish woman who runs away from an arranged marriage. An inside look at the life of a used-book street vendor.

(Here are some tips on how to make used books appear newer: “Cleaning them with rubbing alcohol was only the first step. . . . When the pages started to fall out, you could just glue them back in. It was best to use a wide-gauge syringe to apply the glue.”)

Author Ben Nadler has mixed together this unusual batch of ingredients to create his new novel The Sea Beach Line, and for the most part the concoction works, thanks to an easygoing narrative style, the fascinating details of the ingredients, and a page-turning plot.

However, the story relies on a narrator—Isaac (Izzy) Edel—who is too unbelievably incurious and passive, especially considering that he is supposed to be on an all-consuming quest to find his father, Alojzy.

The quest is launched when two pieces of mail arrive almost simultaneously at the home of Alojzy’s ex-wife, Ruth: a letter from a stranger announcing Alojzy’s death, and a postcard from Alojzy himself.

Alojzy—a Polish-Jewish immigrant, would-be artist, and former Israeli soldier, usually called Al—had long ago left his family, although he contacted Izzy occasionally. To the best of anyone’s knowledge, he had been selling used books on the New York City streets and working side jobs for a Russian mob in Brooklyn for years.

With nothing much else to do, still half-stoned from Oberlin, and regretting that he had rejected his father’s plea to join him on an “adventure” (probably a crime spree) when he was 16, Izzy decides now to try to redo the past by finding Al, or at least finding out if Al is really dead.

“The opportunity to step directly into my father’s shoes was more of an incentive than the money,” he thinks.

Izzy tells himself that in doing these so-called favors, he is simply trying to prove his trustworthiness to the mobsters, so that they will give him information about Al. Yet he almost never asks them anything, and he swallows without further questions Roman’s one vague mention that “I have heard that Al left town by bus from Port Authority three months ago.”

Instead, Izzy declares that the sketches his father left behind are, somehow, the real clues. And when he meets Rayna, the runaway ultra-Orthodox bride, who bears an uncanny resemblance to a woman in many of the sketches, he further declares that she must be a ghost.

Luckily, about two-thirds through the novel, Nadler, the author, pulls back from some of the least-believable elements and plunks Izzy sharply into reality. After all, with real-life mobsters, white-collar crime, budding romance, and a beautiful young woman in hiding, who needs ghosts?

But The Sea Beach Line offers far more than ghosts and criminals. Nadler has the courage to explore worlds—both spiritual and gritty—that are not usually the stuff of mainstream fiction, especially not combined. Mystical and folk stories are sprinkled throughout, including a retelling of the book of Esther. Best of all are the sympathetic, Steinbeck-like portraits of the lives of street people whom most of us ignore.

Izzy’s and Rayna’s fairy-tale haven, camping out in the storage unit with Al’s books, can’t last of course. (For one thing, they occasionally need showers and a washing machine.) But they, and the readers, learn a lot while they are there.