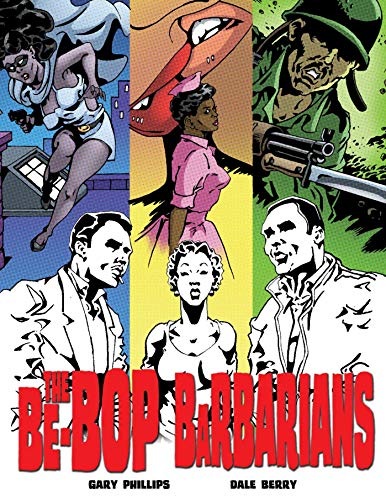 “this graphic novel is for readers who know how to snap their fingers while turning the page.”

One can listen to jazz on many levels. The music is classical as well as complex. Under the flesh of jazz one will always find the bones of the blues. This is the best way to understand and appreciate The Be-Bop Barbarians. This graphic novel attempts to play all the keys at once. Set in the 1950s, the story riffs on race relations, police brutality, communism, espionage, and sex.

At the center of the book are Cliff Murphy, Stephany “Stef” Rawls, and Oliver “Ollie” Jefferson. They are graphic artists, each struggling with the desire to create and own their work. In many ways their lives mirror the jazz musicians of the period. Author Gary Phillips decided to write this book based on the lives of three real-life pioneers in comics: Jackie Ormes, Clarence Matthew Baker and Elmer Stoner. He begins the book’s preface by stating:

“The three real-life comics pioneers who inspired the characters in this story were unknown to me coming up as a kid who voraciously read comic strips and comic books back when we still called that part of L.A. South Central.”

Phillips and Dale Berry have collaborated on a book for adults that is sensual as well as colorful. The story consists of “three chords” or lives that are linked together. Cliff Murphy is a comic artist “passing” for white and getting into trouble with the wife of his boss. Their affair adds a degree of mystery to The Be-Bop Barbarians.

Oliver Jefferson is haunted by the Korean war but is making a living drawing editorial  cartoons for The Daily Struggle a left-wing publication. It’s Jefferson’s beating first by a gang of whites and then the police that makes this book timely in terms of its story.

Instead of cell phone recorded images Phillips and Berry give us strong, powerful violent punches that echo the hard notes of be-bop. The violence opens the door to community organizing and the seeking of justice.

One will quickly come to admire Stephaney “Stef” Rawls, the third major character. She is perhaps the conscience behind the story, a woman who struggles to create her female-centered art while doing domestic work to make ends meets. How far she will go to do this is perhaps what makes The Be-Bop Barbarians a book that captures the Cold War politics of the 1950s.

During that time America became a nation fearful of Communism and spying. The characters of Phillips and Berry are not just images on the page, they have depth. In this graphic novel community organizing is on full display. Meanwhile the violence at the center of the book serves as a reminder that secrets come with a price.

The only weakness one might find in The Be-Bop Barbarians appears in the last few pages. The authors seem to be playing to the audience and reader when it might have been better to just let the story end and turn one’s back like Miles Davis. There is no need to include a few pages of the author’s sketchbook. The inclusion gives the end of the book an unnecessary textbook tone.

Still the book plays well. It’s a hip read beginning with the musical notes on the first page that frame the buildings and storefronts. It’s Harlem, 1955, an early Sunday morning is just letting go after a long Saturday night filled with jazz and dancing. Phillips and Berry know how to take it from there. In the middle of the book Dizzy Gillespie jumps in and proclaims “This is for all you Be-Bop Barbarians.” Yes, this graphic novel is for readers who know how to snap their fingers while turning the page.