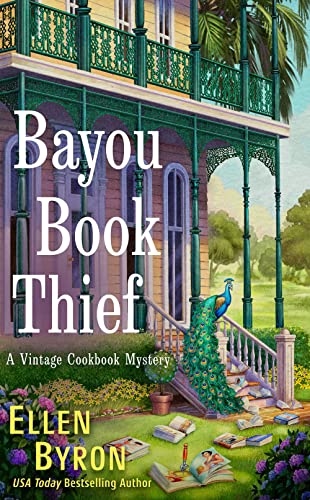 Her primary character, Miracle (Ricki) James-Diaz, has just landed a job to die for—the owner of Miss Vee’s Vintage Cookbook and Kitchenware Shop at one of New Orleans’ historic homes/museum. Ricki’s background and knowledge of books and their value makes her the perfect candidate to operate this shop.

Once the shop is established and ready to do business, it doesn’t take long before the first murder occurs. Tour guide Franklin Finbloch, a man of dubious honor and a thief of cookbooks from the museum, is found dead in large trunk sent to Ricki along with other boxes of vintage cookbooks.

As with most cozy mysteries, the task of discovering who the culprit is falls to the main character. And it doesn’t take long for Byron to tie Ricki up with suspects all over the place. She even believes she is a suspect, but Byron does not give a clear reason for that suspicion.

No one is left out of the mix—”. . . she ran through a list of suspects she’d assembled in her mind . . . she left no one off the list. Winifred, Abelard, Madame, Madame’s family, landlords Ella and Max O’Brien, Minna, even friend-coworkers Zellah and Lyla and nonfriend-coworker Theo . . .”

Everyone comes under consideration in Ricki’s mind. And yet at no point in the story does the reader consider that any one of these people is really being suspected of murder. Most cozies will have three to five characters who will be good suspects, but Byron has nailed too many hides to that wall.

Ricki makes friends with the detective responsible for getting to the bottom of the crime, and as Ricki decides which of the many characters would be a good suspect, she makes a point of calling Detective Rodriguez (Nina) with her theories.

It should be noted that Byron does give Ricki good reasons to believe some of her theories, but she is unable to convince the detective and therefore nothing comes of her suspicions with the police.

Byron develops Ricki’s character through her personal history—a young widow whose husband, Chris, died of a stunt-gone-wrong. “She would always feel guilty about his death and vowed never again to be haunted by the thought that she should have done something.” Thus, when she has the opportunity to solve this crime, she jumps in feet first!

Ricki was also involved with an employer who created a Ponzi scheme to defraud his clients. This particular piece of background seems to be unimportant to the story, although Byron repeats it several times throughout the story.

While searching for motives for Franklin’s murder, Ricki discovers that several of her vintage cookbooks have been plagiarized. As she searches for the true author of the cookbooks, she learns that one of the museum’s guides is that person. Now she just needs to find out who the plagiarist is.

As with most cozies, there is more than one murder, and Bayou Book Thief follows that order when a sleazy book publisher enters the scene. Ricki discovers the publisher of the fake cookbooks and confronts him, to no avail. Within a few pages, he is murdered, and Ricki is suspected of committing the crime…but only for a few short pages.

Now Ricki has to not only find the murderer, but also determine if there is a connection between the two murders. Byron throws in some romance with one of Ricki’s neighbors, but the reader never feels that it is a serious romance.

As the story progresses there are times when a scene is created as if the reader is supposed to know what is coming, but there are no appropriate clues or foreshadowing to help the reader.

While the story has a good premise, it is a slow read, the narrative feels choppy, not smooth. There are places in the story, such as the wedding at the end, that are just unrealistic, and one is left to wonder why the scene is there at all.

To her credit, Byron sticks with Ricki’s third person point of view through the entire story. Her setting in New Orleans is clear and visual and her characters, for the most part, are well developed.