Battleships: The World's Greatest Battleships from the 16th Century to the Gulf War 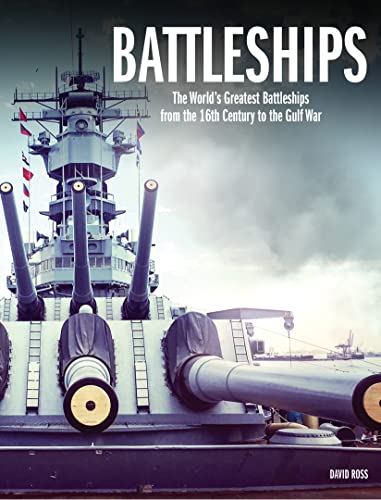 “This is a magnificent book for anyone interested in the history of these great ships.”

Battleships rule the waves was the mantra of naval warfare for over 300 years, and this wonderfully illustrated volume offers up 52 of the finest examples of the big-gunned warship starting in the 16th century and ending with the battleship’s final hurrah in the Persian Gulf War.

Starting with some of the first purpose-built warships in the 1500s, the author takes the reader through a journey of evolving technology as some of the most famous ships in naval history are chronicled and compared.  Using a variety of illustrations for each class of vessel, the story of each ship is told for its contribution to the development of ships-of-the-line, ironclads, battleships, battlecruisers, and all the variants of each, including a cutaway view of each vessel to show the often-cramped layout for those serving aboard.

The evolution of technology for propulsion, gunnery, and overall design tradeoffs for each ship is fascinating to see, particularly during those technological transition stages where steam propulsion starts to dominate, but not replace sails. These comparisons provide an instructive look at how naval architecture and weaponry struggled to keep up with rapid advancements in gunnery and armor.

These ships in particularly underwent a rapid revolution in the late 19th and early 20th centuries, culminating in the ultimate technological breakthrough in battleship design, the HMS Dreadnought, launched in 1906. With its fully turreted guns able to fire a massive broadside to either side of the ship, coupled with advanced steam turbine engines, this ship was not only the forerunner of all modern battleships, it completely changed the naval balance around the world, leading to a naval arms race in Europe that was considered one of the causes of the First World War. All battleships of the 20th century can trace their lineage back to this ship, and the pace of technological change only accelerated during the First World War and between the world wars.

However, even as one of the last and greatest battleship engagements occurred in World War I, the Battle of Jutland, which many of the vessels in this book participated in, a new weapon emerged that would soon render the battleship obsolete.

One class of ships discussed in the book, the Courageous-class, were considered unsuitable as “battle cruisers” and were converted to aircraft carriers. While traditional admirals mocked these ships, they provided valuable experience for the British Royal Navy and foreshadowed the new queen of the seas.

However, even as aircraft carriers became the primary weapon for fleet engagements in World War II, battleships still had their place, although they were now relegated to either escorts vessels in a carrier task force or used as shore bombardment platforms to support Allied amphibious operations. The great battleships of the war, particularly the German Bismarck and Japan’s Yamato were probably the zenith of battleship design, but both were quickly sunk without making any significant contribution to the war, the Yamato being sent to the bottom entirely by aircraft in the greatest testament to the obsolescence of these once-dominant ships.

Although the US Iowa-class was greatly modified in the 1980s and the USS Missouri and Wisconsin served in Operation Desert Storm, the expense of these great ships did not justify their continued utility, and the last US battleship was decommissioned in 1992.

This is a magnificent book for anyone interested in the history of these great ships. With its numerous illustrations, tables and informational charts, it provides a great reference to some of the finest warships ever constructed.