The Battle of Versailles: The Night American Fashion Stumbled into the Spotlight and Made History 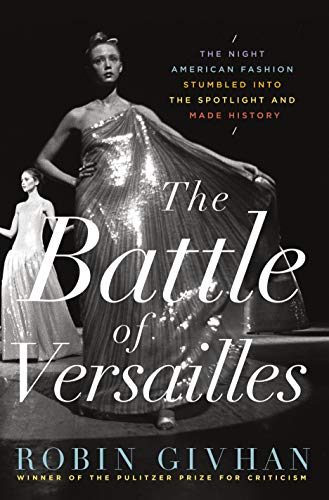 If you wonder how one single event in fashion history turns into a 320-page book, then have I got a book for you. The Battle of Versailles contains a diary, multiple biographies, and an expose about an event, its cast of characters, the prevailing social climate of that era and the evolution/revolution that is fashion. All of this is housed between the covers of the book.

Givhan offers the reader insights, firsthand accounts, oft told legendary moments, and the monumental effect that this one show had on an entire industry. Her research brought her to those involved in that event, but as with any retelling, you must remain keenly aware that memories are not always as factual or accurate as you might think. All of us remember a single moment with a different perspective. You have heard the expression that there are three sides to every story: yours, mine, and the truth.

As far as biographical information goes, there is much explanation given to the major protagonist of this moment who takes the form of one Eleanor Lambert. This is information that is really germane not only to the event but to the continuum of fashion especially in New York City.

Next, Givhan gives us background and career information about each of the designers who were involved and lastly what their positions were within the hierarchy of fashion.

The American contingent contained Anne Klein, Halston, Bill Blass, Oscar de la Renta, Stephen Burrows, Joe Eula, Kay Thompson, Liza Minnelli, Eleanor Lambert, and then the French were represented by St. Laurent, Ungaro, Dior (Marc Bohan), Givenchy, and Pierre Cardin. The book is filled with personalities from both sides of the Atlantic who were stars, costars, and supporting cast for the event.

Make no mistake that this tome might have been re-titled The Real Fashion Designers of New York or of Paris. There are that many personalities revealed and that many issues at hand. To say it was a soap opera or reality show waiting to happen would be an understatement. The book reveals the pettiness, the egos, the competitive natures, and the geo-specific climate of fashion, as well as what the long range effects of this would have on the world of fashion.

At the risk of being politically incorrect, the one aspect that seemed to be a recurring issue was that of race. How relevant or factual this might be cannot really be proven or debunked, but the reader is made aware that race and its sociological implications were more pressing than the fashion itself.

If there is anything objectionable to this reader it is that Givhan takes an event that happened over 40 years and tries to extrapolate its effects to current and future events. This is a highly subjective move which might ruffle the feathers of the educated or well informed reader. On the plus side, she discusses the aftermath of each career of each designer after the event.

This was a pivotal moment in fashion, and the effects of the event changed fashion as we knew it at that time and for decades to come. Another reason is that this is a topic that has never really been written about in any great depth as so many of the players have died and there is very little actual visual evidence of that moment available.

If you want an inside look at fashion history, then you best read this and pay attention. Keep in mind that this is a telling that is part factual and part subjectively remembered.