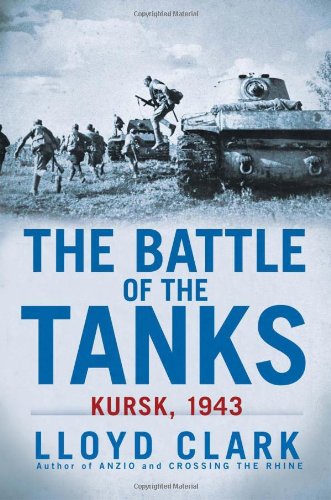 “Mr. Clark has a reputation for both his deep knowledge of military history and his ability to make it accessible to a substantial reading audience. That reputation is well deserved.”

In the first week of February 1943, what remained of the German Sixth Army surrendered to Soviet forces in the ruins of Stalingrad. Its defeat at Stalingrad cost the German Army approximately 300,000 men and erased from its order of battle the equivalent of at least 25 divisions. Joseph Stalin celebrated the occasion by launching an offensive against the German forces in southern Russia, with the intention of destroying those forces and setting the stage for further offensives that would drive the fascist invader from the soil of the Motherland.

But although the German Army had been gravely stricken by the catastrophe on the shores of the Volga River, it had not yet been defeated. Instead, it managed to avoid another encirclement and allowed the Red Army’s spearheads to strike deep into the Ukraine.

When the Soviet offensive lost its impetus, the Germans struck back and inflicted a substantial defeat on the Red Army. With the approach of spring all of European Russia turned into a muddy quagmire, and both sides were forced to terminate further operations. When the fighting stopped a large salient, with the Ukrainian city of Kursk at its center, protruded westward into territory still occupied by the German Army.

In The Battle of the Tanks: Kursk, 1943, British historian Lloyd Clark tells the story of Operation Zitadelle (Citadel) the German effort to excise the Kursk salient. The resulting clash of armored vehicles is generally recognized as the largest tank battle ever fought, one whose size and ferocity likely will never be equaled. Mr. Clark, now associated with the Department of War Studies at the Royal Military Academy Sandhurst, also is a Professorial Research Fellow in War Studies at the Humanities Research Institute, University of Buckingham.

Mr. Clark has a reputation for both his deep knowledge of military history and his ability to make it accessible to a substantial reading audience. That reputation is well deserved.

While the tank battle at Kursk is the centerpiece of his work, author Clark realizes, as would any good historian, that it did not take place in a vacuum. He places the great battle in its context, relating it to the events that preceded, and those which followed. He devotes the first two chapters of his book to a consideration of the Great War and its effects upon Germany and Adolf Hitler on the one hand, and Soviet Russia and Joseph Stalin on the other. Without the legacy of the First World War, there may never have been a Second.

But the Great War did empower Hitler, and he was the author of another great global conflict, one in which Germany almost immediately enjoyed more and greater success than it had in four years of brutal fighting. Mr. Clark shows how, in a particularly nasty and ironic twist of the kind that so often affects human affairs, the relative ease of Germany’s early conquests in the new war contributed to the ultimate demise of the Third Reich, for they convinced Adolf Hitler that the blitzkrieg, as practiced by the German Wehrmacht, was an invincible tool of conquest.

As author Clark illustrates, when coupled with the Fuehrer’s loathing of Bolshevism and contempt for Slavs, his unthinking conviction in the innate superiority of German arms persuaded the dictator to embark upon a course of assured self destruction. The German invasion of the Soviet Union, code named Operation Barbarossa, began on the first day of summer, June 22, 1941, and ended in the first week of winter in blinding snow and brutal cold.

In between, the Wehrmacht practiced its art with great effect, its mechanized spearheads repeatedly advancing in leaps and bounds of hundreds of miles, encircling and capturing or destroying innumerable Russian armies. The same scenario seemed to repeat itself in the summer of 1942, when the Wehrmacht subjugated the Crimea and Ukraine, and advanced deep into the Caucasus.

But as Mr. Clark demonstrates, these spectacular operational successes, the destruction of whole Russian armies, the capture of great swaths of territory, all masked a grim (from the German point of view) reality. The Red Army, often apparently on the verge of defeat, in fact had begun the slow but sure process of gutting its German counterpart. The inconceivable losses in men and materiel suffered by the Red Army could be, and were, made good in time to save the Soviet Union.

On the other hand, as Mr. Clark points out, the German Army, having incurred proportionally similar equipment and human losses, did not have the capacity to regenerate itself.

By the late summer and early autumn of 1942, it was clear that the German Army had overreached itself, a fact tellingly brought home by the destruction of Sixth Army. But as author Clark shows, the lesson of Stalingrad was lost on the Nazi dictator. Instead, he saw the Kursk salient as an opportunity to deliver a blow to the Red Army that would bring the victory he had anticipated for the last two years.

It is in the telling of this dramatic tale that author Clark excels. In doing so, he capitalizes upon the many scholarly works that have been written about the battle over the last quarter century, as well as upon the raft of memoirs written by the battle’s survivors.

Most interestingly and surprisingly, however, in the year 2009 Mr. Clark had the good fortune to locate, meet, and discuss the battle with former soldiers on both sides still living 66 years after the event. Better still, he had the necessary quality of humanity to bring some of these men together to commiserate over friends long lost and to begin to experience mutual reconciliation.

In The Battle of the Tanks, it is the men who fought there who tell the story of the great and fateful encounter. To this struggle the attacking Germans committed almost 780,000 men, 1800 aircraft, 7400 cannon, and 2400 armored vehicles. The defending Red Army put almost 2,000,000 men in the field, 3500 aircraft, 31,000 cannon, and over 5000 armored vehicles. Adolf Hitler, apprised of these details as the date (July 5, 1943) for beginning the offensive approached, confided to one of his generals that the thought of it made him sick to his stomach.

And well it might have done. For the Soviets, whose intelligence services had long since revealed the enemy’s intentions in some detail, had turned the salient into one gigantic tank trap, with many layers of defensive lines crisscrossed with trenches, bunkers, firing pits, minefields, and anti-tank ditches, all of them manned with well-trained and highly-motivated troops whose willingness to fight and die to the last man was confirmed repeatedly over the battle’s eighteen days.

After two years of losing, the Red Army now had officers and men whose skill as soldiers matched their courage and toughness.

Controversy remains with regard to the number of casualties (killed and wounded) suffered by both sides in the battle of Kursk, but there seems to be consensus that the Germans suffered almost 60,000 and the Russians nearly three times as many as the Germans. As author Clark makes clear, while these numbers account for a great deal of human suffering, they are not as significant as the relative ability of each side to replace those losses, a measure clearly favoring the Red Army.

But the significance of the battle of Kursk extends far beyond the numbers of soldiers who died or were wounded in it. When the smoke cleared, the German Army went irrevocably on the defensive, and its retreat before the Red Army was halted only by its unconditional surrender.