The Battle that Forged Modern Baseball: The Federal League Challenge and Its Legacy 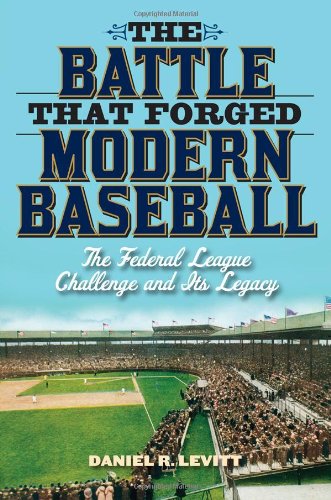 “Anyone who wants to advance beyond the stage of fandom to understand what it takes to establish and run professional baseball would do well to read Mr. Levitt’s fascinating book.”

Trade wars are common in business history. Most baseball fans don’t realize that the business of professional baseball has experienced several trade wars. The Federal League war of 1914–15 was one of those trade wars.

In economic terms, a trade war is a contest for markets (in this case, cities) and supplies (in baseball, it’s players).

Professional baseball was formed much the way the whites settled the American West: The guy who got there first took the land and refused to give it up unless forced by a stronger and more determined enemy.

In baseball, until about 1903 the National League had come out on top when fighting its challengers. Then the new American League confronted the National League at the turn of the century, and the challenger won, forcing the National to give up a piece of the action (territories) and supplies (performers). In 1914 the Feds hoped to do the same thing.

Overt threats made by Federal League organizers to the baseball establishment, the National and American Leagues, began in 1913:

“We are going to invade the majors and we will take some of their players, too. We are going to begin in St. Louis,” threatened a Federal League spokesman.

Wealthy citizens who believed their town should have a major league team invested thousands in new parks as well as new or minor-league teams, not only for St. Louis but also for Kansas City, Indianapolis, Baltimore, Buffalo, Chicago, and Pittsburgh.

The National and American League owners and investors dismissed the Feds’ warnings as empty boasts, while newspapers gloried in publishing the colorful insults that passed back and forth between clubs and leagues.

Players, most of whom felt little loyalty to their clubs, were simply pawns in this business fight, although they were able to take advantage of increased demand for their services by accepting greatly-increased salary offers from the Federal League agents. These players were known as contract-jumpers, and some jumped more than once. Levitt’s thorough research enables him to document many of these back-and-forth player events.

A factor in the baseball war that raged for two years was the reserve clause, which the National and American Leagues had used since 1879 and which club owners claimed tied players to their clubs permanently. The owners knew that the reserve lacked solid legal status, so they added a clause to the player contract stating that part of the player’s salary compensated him for agreeing to be reserved for the next season.

The new clause did nothing to keep players from breaking their contracts or pretending the reserve clause didn’t exist. And the reserve remains a part of the player contract, although it is now limited to six years.

Perhaps the most striking event of the trade war was the court’s declaration that Organized Baseball was not interstate commerce and therefore did not violate the anti-trust laws. Obviously, of course, the teams must perform a lot of interstate travel and conduct business on an interstate basis in order to fulfill their schedule. But this court decision has helped the business of baseball maintain itself over the years.

Daniel R. Levitt’s work in The Battle that Forged Modern Baseball is based on extensive research in all the right sources. Moreover, the author does not avoid analysis of the events he records, particularly in his thoughtful final chapter, Aftermath.

Anyone who wants to advance beyond the stage of fandom to understand what it takes to establish and run professional baseball would do well to read Mr. Levitt’s fascinating book.