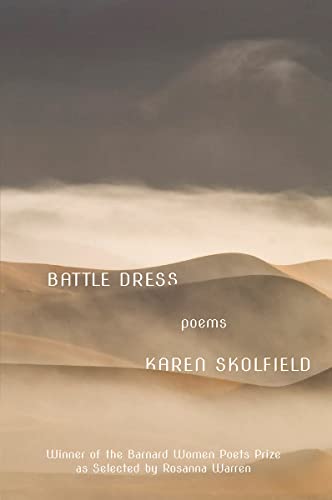 “If Battle Dress is any indication of what’s to come next from Skolfield, readers should expect yet another masterfully rhythmic, morally gut-punching, timeless book of poetry.”

Battle Dress by Karen Skolfield is as timely as it is timeless. This sophomore collection is an intricate and nuanced investigation of violence: who uses it, when it should be used, toward whom it should be directed, and the impact it has on everyone within its vicinity.

Skolfield, a United States Army veteran, explores violence and its implications through group and individual identity as well as gender. Battle Dress offers an often-overlooked perspective of military service—a woman’s—at a time in U.S. history when what it means to serve one’s country and who is deemed capable of serving is hanging in the balance. Skolfield provides a resounding answer to these questions in her poem “CNN Report: Symptoms of PTSD Mimic Lyme Disease.” The psychological trauma (PTSD) sustained by the speaker dominates the poem and is compared to Lyme Disease. The disease is then compared to a soldier:

may put on camouflage, sit in shadow,

This personification serves a dual purpose. First and perhaps most importantly, it drives forward the theme of insidious identity loss—and the resulting adoption of an overarching group identity in order to survive—that is so rampant within military service, and upon which Skolfield touches repeatedly in Battle Dress.

Secondly, it references the mindless monotony of cyclical violence the speaker has endured during their service. If a disease, on a microlevel, can behave similarly to a servicemember, does the body of either party retain any of its autonomy? The author is calling to mind the most basic commonality of us all: our capacity to feel pain.

As she says so perfectly and so succinctly in conclusion of the above poem, “Despite everything, breath goes out / and is pulled back in.” Skolfield knows that no matter who is serving, their survival still comes down to flesh, blood, and bone. The organization of those parts ceases to matter when one has survived the service and is then met by a new kind of violence–the kind our minds can harbor.

Skolfield’s speakers often lament their gender; they long to be male and strive to behave as men do, like in “The Throwing Gap.” The female speaker is trying to pass a grenade throwing exam so that she may advance to throwing live grenades:

our arms to be boys, our shoulders

brutal and male, we thought of torsos

and hands that had beaten or punched.”

Here, the violence at the heart of combat is seemingly inseparable from what constitutes being a man—and what makes a “good” soldier. Skolfield illustrates the military’s deeply rooted sexism as a trait propelling a violent group ideal, as if this is the (male) identity that all recruits should strive to adopt.

Throughout Battle Dress, Skolfield returns to her identity as a woman and the bond between female soldiers as a foil to the violent, male-dominated environment the speakers find themselves in. Shades of queer romance, especially in “Why I Never Wrote About the Army” and “Nocturne with Tracers” seem to further support why the speakers reject the identities they are force-fed by the Army. Poems like these two are main sources of tenderness and calm amidst the otherwise “I-am-trying-to-make-a-much-needed-point” cacophony that is Battle Dress.

“Nocturne with Tracers” features a female speaker who is whispering with her ‘battle buddy’ “in a voice so soft / it was barely Army.” The author uses the constant enjambment in this poem to hint at not only how you can find some quiet in war, but that what—or more accurately, who—makes up those quieter, beautiful moments for the speakers is usually another woman or the warmth of female energy in some capacity.

The most surprising and appealing aspect of Karen Skolfield’s Battle Dress is the pacing. Skolfield knows exactly when and how far to push the heaviest subjects while weaving in beautiful moments where the reader can exhale. If Battle Dress is any indication of what’s to come next from Skolfield, readers should expect yet another masterfully rhythmic, morally gut-punching, timeless book of poetry.