The Battle of Arnhem: The Deadliest Airborne Operation of WWII 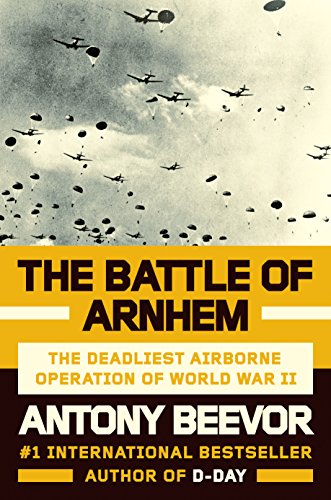 “long overdue update to a tragic and avoidable Allied debacle, which continues to offer stark lessons on the dangers of hubris and substituting optimism for solid operational planning.”

Operation Market-Garden continues to intrigue both students of history and military professionals after 75 years. As the largest airborne assault of World War 2, the bravery and sacrifice of the American and British paratroopers stands in stark contrast to the hubris and operational failure of Allied leadership.

In this new volume, Sir Antony Beevor takes a fresh look at this battle first popularized by Cornelius Ryan’s landmark A Bridge Too Far, later made into one of the last all-star Hollywood World War 2 movies. Unlike several recent histories that concentrate on traditional battle narratives of the contributions of American or British regiments or brigades, Sir Antony uses previously untapped primary sources to not only reexamine the battle but bring to light the contributions and sacrifices made by a previously ignored group: the Dutch people.

Although other volumes have provided some anecdotes of the support given to the Allied forces by the Dutch underground and military forces fighting with the British Second Army, this book goes a step further by describing the sacrifices made by the Dutch citizenry, especially when they faced the brutal German retribution during the winter of 1944–1945.

When reading through the hasty and ill-conceived planning for this attack, the arrogance and “victory fever” that swept through the Allied high command during the early autumn of 1944 is truly breathtaking to recall. Although the German army in France had been virtually destroyed and driven back to the German border, the Allies still faced significant logistics and manpower issues as they raced across France, even as the German forces showed signs of rebuilding as they fell back upon the Reich.

The hopelessly optimistic British plan for Market-Garden was built on two assumptions, both of which turned out to be wildly incorrect. First, that an entire armored corps could be pushed up what was essentially a two-lane road. Not only that, the British assumed this same road network could also provide the logistic support for this armored spearhead. Even assuming that the German resistance was as weak as British planners assumed, it was an overly optimistic projection.

Second, the assumption that German resistance had totally collapsed on the Western front also turned out to be a fallacy. Even though the German Army had been essentially destroyed in the race across France, the Germans had an unmatched ability to cobble together pieces and parts of decimated or inexperienced units around any available experienced officers and NCOs.

These scratch Kampfgruppes or battle groups could be quickly thrown into the battle and performed quite effectively. In addition to the oft related Allied intelligence failure to detect the remnants of two German SS-Panzer divisions in the woods around Arnhem, several other German mechanized Kampfgruppes were quickly able to get into action where their firepower quickly took a toll on the lightly armed paratroopers.

Sir Antony describes the unfolding of the battle in marvelous detail with numerous recollections from both Allied and German participants. One aspect of the battle he covers much better than older narratives is the heavy fighting beyond the Arnhem bridge, the usual focus of Market-Garden histories. The German ability to isolate and destroy most of the British paratroopers in detail was a significant contributor to their eventual victory.

In addition, the almost constant attacks on the American airborne divisions fighting to keep the supply corridor open prevented the Allies from mustering the combat power to rescue the beleaguered British paratroopers, who were ignominiously returned to the southern bank of the Lower Rhine River almost nine days after the battle began.

But this volume stands out by giving “the rest of the story”—as Sir Antony provides the post-script of the battle, which was given short shrift in many early narratives that sort of tapered off after the remnants of the 1st Airborne are evacuated.

Sir Antony bluntly recounts the shameful conduct of the Allied commanders, especially Field Marshal Montgomery and his British subordinates. Market-Garden was the last indisputable German defensive victory on the Western front, but the Allied high command tried to furiously spin the battle into a partial success.

Montgomery’s egotistical desire to command a single Allied thrust to Berlin should have died in the streets of Arnhem and Nijmegen, but he continued to badger General Eisenhower with his delusional plan until a political showdown in the Allied high command in the fall of 1944 ended this fantasy. The planning, execution, and aftermath of Market-Garden was really the low point for the Allied war effort in the West during 1944.

But the final tragedy of this battle is not borne by Allied soldiers or commanders but the Dutch people. Exacting harsh retribution, the Germans starved and looted the Netherlands during the terrible winter of 1944–1945. By the spring, large portions of the Dutch population faced famine, and it took the intervention of the Dutch government-in-exile to focus Allied attention during the final days of the war on the plight of the Dutch people. In spite of their tribulations, the Dutch performed heroic feats to support the Allies, both during and after the battle and the recounting of their story is long overdue. Sir Antony balances personal and narrative writing with ease in this long overdue update to a tragic and avoidable Allied debacle, which continues to offer stark lessons on the dangers of hubris and substituting optimism for solid operational planning.