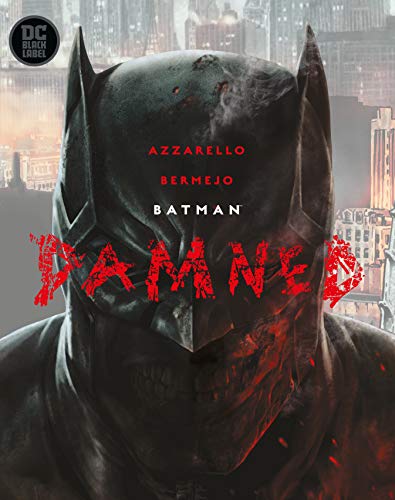 “Gorgeous graphics and a neat idea cannot save what eventually becomes a tragically flawed effort.”

The Joker is dead. That’s the premise for the 176-page graphic novel, Batman: Damned. Did Batman go off the rails and kill his nemesis, or are there other, more sinister, forces at play here? Unfortunately, a wounded Batman can’t remember what happened, although the he feels he might be ultimately responsible.

What’s a crime fighter supposed to do? The answer comes in the form of DC’s most iconic anti-hero sorcerer John Constantine. Puckish, selfish, a man whose moral compass never really points north, Constantine offers his brand of assistance to the caped crusader.

Although a bit of magic always comes in handy, Constantine’s penchant for screwing with people makes his help a double-edge sword. Add to this mix the ghost of Boston Brand, former circus aerialist, and even an appearance of Swamp Thing, Batman Damned is an effort to inject a horror story into the DC hero’s legacy.

The art is gorgeous. Instead of hyper-stylized characters, Lee Bermejo inks the graphic novel with exacting perfection, offering “comic book” exaggeration to the character of Swamp Thing, who makes a brief appearance midway through this horror/whodunit. This proves a refreshing break from the biff/bam/boom of the cheesy comics of yesteryear in which even the hero’s muscles had muscles. With the horror theme, the art is dark, moody, which suits the theme perfectly and adds to the narrative’s suspense.

What better narrator for a DC horror story than the bad boy of magic John Constantine, Hellblazer, the bad boy of DC horror himself? Instead of the dry, noir voice that populate most Batman stories, Azzarello gives over to sardonic wit peppered with dark metaphors.

Given the beauty of the art, the character of Constantine in a Batman story (and including the ghost of Boston Brand, a quasi-hero known as Deadman) one would think this to be a recipe for success. Unfortunately, this does not turn out to be the case. Constantine’s narration roams from blatant, in-your-face metaphors, to the unnecessarily cryptic and even though readers may enjoy screwing with Batman’s mind, in the end his only real purpose is to force the plot (and Batman) forward into dangerous territory, a sort of reverse deus ex machina. And while he does drive the story a bit, his absence from the narrative would not have been missed.

With a wealth of Batman graphic novels out there, it’s no wonder that Azzarello and Bermejo try for something different, swinging for the fences with a horror story that involves the Joker’s death. The cryptic, “what the heck” ending doesn’t help and it leaves the reader disappointed. Gorgeous graphics and a neat idea cannot save what eventually becomes a tragically flawed effort.