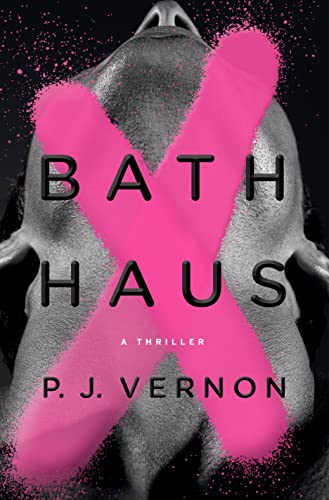 Bath Haus is a deftly written suspenseful thriller. It is also a brilliant character study of a disastrously dysfunctional couple.

Five years before events spiral out of control, Nathan, a resident at an Indiana hospital, meets Oliver, an addict in rehab. Nathan is immediately drawn to this lost young man who is fresh out of an abusive relationship. Now Oliver lives with Nathan who has a position as an emergency room surgeon at Walter Reed Hospital. The couple live in a well-appointed Georgetown mansion owned by Nathan’s family’s foundation. Through friends, Nathan has found Oliver a job as a physician’s receptionist. Nathan sees Oliver as someone who will stay with him because of what he can offer: love, stability, control. Oliver realizes that Nathan has saved him from chaos and that losing Nathan would put him back in a death spiral of addiction. Theirs is not a relationship made in heaven, but it has worked for five years.

Everything unravels when Nathan goes to a medical conference and Oliver decides for the first time to go to a gay bathhouse for a bit of anonymous sex. Unfortunately, he ends up in a cubicle with a psychopath who tries to strangle him. Oliver gets away, but Kristian, the psychopath, keeps popping up on Oliver’s computer and in person. Oliver is terrified of Nathan finding out and ending their relationship. How can he balance his need to hold on to Nathan and the order he provides with avoiding a terrifying murderer? On top of that, Oliver’s abusive ex appears on the scene.

Bath Haus alternates chapters told from Oliver’s and Nathan’s point of view. Oliver becomes more terrified as events in his life spin out of control. Honesty from the outset may be the best policy, but he is too terrified of ending up a homeless addict. Nathan tries to act like nothing is wrong but has lost all trust in Oliver. Nonetheless, he seems to want to hang on to this relationship even as his domineering mother threatens to evict him from the Georgetown house if he doesn’t end it.

As one would expect from a masterful thriller, the plot of Bath Haus has many twists and turns before its surprising, violent climax that makes The Boys in the Band and Who’s Afraid of Virginia Woolf seem joyful. At the heart of the novel are the portraits of the two partners, both on the verge of desperation.

Above all, we come to understand and sympathize with Oliver, despite his obvious flaws. This young man from a poor background in an Indiana small town, has been transported into a totally different world where his only security comes from sexual availability and acceding to his partner’s total control. Author P. J. Vernon uses flashbacks effectively to show us Oliver’s terrible past and his meeting with Nathan who loves playing the role of savior. Unlike the careless rich people around him, Oliver is painfully aware of the consequences of his misdeeds. They turn out to be even worse than he imagines.

Bath Haus is not just excellent gay fiction. It is one of the most absorbing and exciting novels this reader has encountered in quite a while.