Baseball as a Road to God: Seeing Beyond the Game 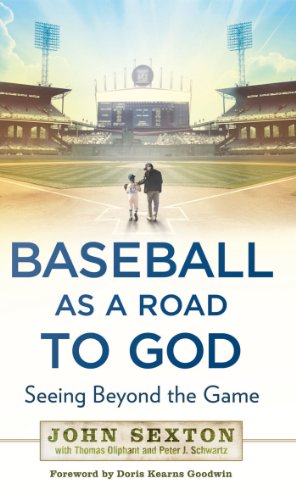 “. . . an amazing, engaging, and fascinating chronicle of the game of baseball and the men who’ve played key roles in elevating it to heavenly status [marrying] religious tradition, practice, and belief with the emotional, psychological, and physical sensations every true fan experiences in the course of a 162-game season.”

“‘. . . baseball offers a window into the nature of faith, even in the deepest meanings of the word—as a source of comfort, of motivation, of understanding, and above all, of meaning and ultimate purpose.’”

It’s only fitting that Baseball as a Road to God by John Sexton should be released as baseball teams and their fans gear up for the start of the season. After a long, cold, dark winter, the spring brings renewal, light, and the hope for the ultimate prize: a World Series win.

An outgrowth of Mr. Sexton’s popular college course of the same name, the book draws many comparisons between beliefs, ceremonies, and superstition as they relate equally to baseball and religion.

Informed by his Catholicism, Mr. Sexton attributes faith, doubt, conversion, community, and nostalgia to both baseball and religion as he creates an intriguing, engaging history/instruction manual for readers.

The book is divided into ten chapters—one for each inning in a baseball game plus as the post-game wrap-up. Throughout the book, readers encounter ghosts of the past—Honus Wagner, Bill Mazeroski, Rogers Hornsby, Joe DiMaggio and Babe Ruth, to name just a few—as well as current day players. The author equates Opening Day and the World Series to holy days in the church.

And fans will agree he is spot on.

Think about the way you feel sitting in the stands intently watching your favorite team battle its opponent. The baseball stadium, the equivalent of the altar, provides a place where the faithful come to worship. “In this place, magic can happen . . . The old adage claims mother, apple pie and baseball to be sacred, sacred being the operative word,” he writes. “A universe of possibilities can stir a sense of the sacred; and yes, the special places of baseball can be such a catalyst.” And if your team is winning, the experience assumes holy stature.

Mr. Sexton’s own memories of his beloved Brooklyn Dodgers prior to their departure for the West Coast serves as the basis for his “conversion” in later years. Although he initially refused to root for the Yankees when the Dodgers left town, the arrival of his son left him in a quandary. Should he impose his own loyalty on a team long gone or should he cultivate a passion for a local team whose star is on the rise?

The author writes, “The fandom you are born into is the fan you become.” Putting aside his own proclivity, he encourages his son to pledge his allegiance to the Yankees. With this gesture he aims to foster a love of baseball and forge a bond with his son, but also wants him to enjoy the thrill of victory for a team that is rebuilding and holds promise for the future.

Like baseball conversions, religious experiences are unique to every person. But both follow “the building blocks of faith:” actual experience, surrender, feeling/emotion, and acceptance.

Mr. Sexton explains that in religion, believers embrace the past as the foundation of their faith while they look toward everlasting life once they depart this earth. In baseball, fans—if they have emerged winners the previous October—hold onto their glorious memories they hope to repeat as champions in the new season. For fans whose teams hit the golf course instead of the baseball diamond in the post season, their focus is on the future. After all, a common rallying cry has become “Wait until next year!”

The author evokes memories—good and bad depending on your home team—with his retelling of some Impossible Dreams: the 1973 cellar-dwelling New York Mets’ incredible streak that led to a World Series appearance; the 1997 Boston Red Sox’s incredible drive to win the American League Championship; the Red Sox comeback win against the New York Yankees in 2004 and ultimate World Series title.

Anyone with any religious beliefs realizes that faith and doubt go hand-in-hand. So, too, in baseball.

Although statistics and technology have assumed a greater role now in baseball from selecting players to devising plays, there is still room for old-fashioned guesswork along with doubt. Recent turmoil in the church can test the faith of believers; dishonorable events in baseball can lead fans to question their allegiance. Take for instance the 1919 World Series Black Sox scandal. Such outrageous occurrences shake the loyalty of even the most diehard fan. But in time, true believers return to the fold.

What would a book that links religion and baseball be without mentioning the saints? Mr. Sexton fittingly applies the title to a number of players who have outshined the rest. He describes sainthood as “a revelation of deep meaning.” The church rewards men and women who exemplify this definition by naming them saints. Baseball inducts these “legends” into the Hall of Fame in Cooperstown, New York. Players who outperform in an almost supernatural way evoke awe and inspiration in their fans.

Fans will find the historical trivia sprinkled throughout the book interesting and informative. For instance, wearing black armbands on their uniforms first occurred on October 7, 1925 to honor pitcher Christy Mathewson’s passing. His New York Times obituary called him “the most consummate and brilliant artist of all time.”

John Sexton has written not only an amazing, engaging, and fascinating chronicle of the game of baseball and the men who’ve played key roles in elevating it to heavenly status, but he has also skillfully married religious tradition, practice, and belief with the emotional, psychological, and physical sensations every true fan experiences in the course of a 162-game season.

The author relates the game of baseball to the human condition “reflected in this sport as in no other.” In the course of nine innings, fans experience a range of emotions from expectation and elation to frustration and despair. What a perfect metaphor for life.

As Mr. Sexton so aptly writes, “The game’s capacity to thrill, inspire, and galvanize the masses is undeniable.”