Baseball in the Garden of Eden 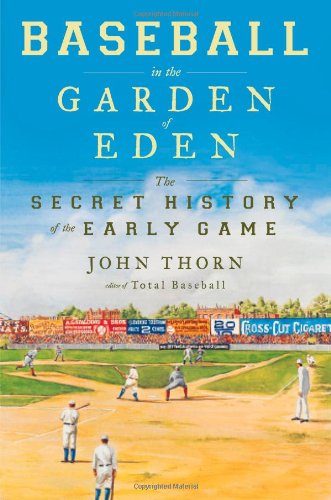 ". . .an impressive work, abounds with new information about the formation of what Americans have long thought of as their national game . . ."

In November of 2010, Bud Selig, whose title is Commissioner of Baseball, permitted himself to become an object of national ridicule, first by perpetuating the false claim that General Abner Doubleday invented baseball in 1839 and then by stating that historians disagree about whether Doubleday created the game.

Despite his lofty title, Selig supervises only men’s professional baseball as played by the clubs in or associated with the two major leagues. He does not supervise research into baseball history, or play among other professional leagues, or amateur play, or play in the women’s leagues or children’s leagues, or the play of millions who engage in fantasy baseball. So his title (with the word “Baseball” implying all of baseball) remains a slight misnomer—like “World Series.”

Actually, no credible historian of baseball, and certainly not John Thorn, the author of this book, accepts the myth that Doubleday was involved in forming the game. Researchers demolished that myth about 60 years ago. With this book Thorn has built on the destruction by deconstructing the claims for other contributors, claims made after the Doubleday story sank like a torpedoed ship.

Baseball in the Garden of Eden, an impressive work, abounds with new information about the formation of what Americans have long thought of as their national game. Although highly interpretive, the book is based securely on the facts, many of which Thorn himself has himself collected over years of research. His work represents revisionist history at its best. In this book he examines many assumptions of the past and overturns them with new discoveries from old printed records.

Those who nurtured the early game, like reporter Henry Chadwick (who has long been called the “Father of Baseball”), were long assumed to have made large contributions to the rules and practices that made baseball into the attractive spectator sport it is today. Some, like Alexander Cartwright, were even thought to have standardized the rules. Thorn shows that a team that preceded the famous New York Knickerbockers as well as other members of the Knicks, like Louis Fenn Wadsworth, more likely helped set the rules and styles of play than did Doubleday, Cartwright, or Chadwick.

Thorn even tracks down the elusive Wadsworth and tells how his suggestions during baseball meetings established several important rules of the game. His re-evaluation of Chadwick’s influence on the game in the light of new information about the way rules developed is enlightening.

Most interesting of all is the author’s unearthing of the importance of Theosophy, a popular cult of the 1900s, in the creation of the Doubleday myth. Thorn demonstrates that members of the so-called commission appointed to decide how baseball began were practitioners of a popular cult called Theosophy and likely formed a cabal to select a fellow cult member to be named the creator of the game, which of course had already been played, under the same name, back in England long before. Thorn’s research shows that the support of the Abner Graves letter in naming Doubleday as baseball’s founder (and used in the establishment of the Baseball Hall of Fame and Museum in Cooperstown) came from a desire to spite Chadwick and his claims of British origin for the game.

Along the way, Thorn debunks Albert Spalding as the embodiment of a great performer/magnate and emphasizes the view of baseball as built on lies by those who twisted its history to suit their purposes instead of the fair and democratic structure it has long been touted to represent. Thorn spins out his research on the big names of early baseball until the reader knows them, their wives, children, and friends much more thoroughly than ever before.

Another aspect of Thorn’s work is its relationship to the books of two other scholars, David Block and Monica Nucciarone. Thorn’s research supports Block’s 2005 book (Baseball Before We Knew It) in showing how American baseball is related to English baseball; and it confirms Nucciarone’s demonstration (Alexander Cartwright, 2009) that Cartwright probably did little to establish baseball rules and made no effort to spread the game westward from its New York epicenter.

Thorn explains where the game of cricket and the early forms called town ball and the Massachusetts Game fit into general baseball history. He also gives credit where due to his colleagues on the Origins Committee of the Society for American Baseball Research.

This book sets baseball and its early practitioners more firmly than ever before into the events of the time and therefore leaves readers with a new and different view of the national game. As an example, Thorn supports the early description of baseball as “manly” and “health-giving” only by comparison with other popular activities of the 1840s and 1850s like gambling, drinking, and whoring.

One aspect of this well-written book that readers might find distracting is the author’s frequent inclusion of lengthy quotations that might easily have been paraphrased and quoted from. In addition, Thorn’s assertion that the Eagle Club began in 1840 is based only on its printed rules, which I, too, saw while researching in the New York Public Library, noting at the time that the pamphlet containing the rules was not printed until the 1850s, so its claim of an 1840 date for the club’s formation (which would make it precede the Knickerbocker formation in 1845) must remain suspect. And it will—until Thorn or one of his research colleagues stumbles across a reference to an Eagle game in one of the early metropolitan newspapers they study so assiduously.

The title of Thorn’s remarkable book refers not to the Biblical Garden of Eden but to the Elysian Fields, a pleasure park in Hoboken, New Jersey, that during the 1840s became a place for baseball teams to play their games and others to escape from New York City for enjoyment of the great outdoors. The Elysian Fields, named for the playground of the Greek gods, must have been idyllic indeed for the early baseball clubs, described in this book as enjoying their formative years while together building a history for the early American version of baseball.