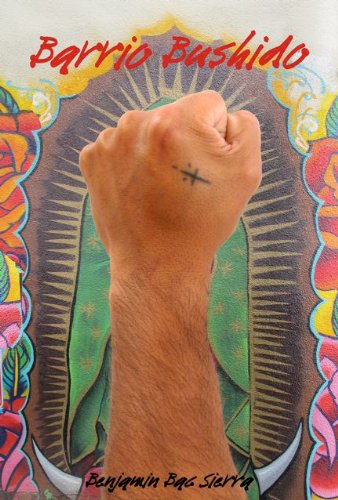 Barrio Bushido is one of the most disturbing books you will ever read. It is violent and bloody and poetic, gritty and real in the same manner as Irvine Welsh’s Trainspotting and Fyodor Dostoevsky’s Crime and Punishment.

Barrio is the story of three gang members growing up somewhere in a Latin ghetto area of California. Lobo, the wolf, is the leader of the pack and a poetic strange soul who seems to move through life in a drugged haze knowing fully that he is destined to self destruct. Toro is the bull, a tiny boy of five left alone at home while his mother cleans office buildings and homes. Toro falls out the window of his apartment building landing on the street in a diaper and learns fast there is nobody coming to rescue him. Santiago is the saint racing headlong into madness, the third pillar of the odd nefarious triad. His childhood is spent feeding his brothers and sisters while his parents sleepwalk through drug addictions and impossible economic realities.

Benjamin Bac Sierra is a writer of such intensity that one cannot help but be moved to extremes just reading the plights of these characters. Barrio Bushido is his first book. The author himself, a former homeboy and a veteran of the Gulf War, clearly knows his topic well. Raised in San Francisco’s Mission district, he joined the Marine Corps at 17 and saw front line combat in the Gulf War. After honorable discharge he completed a Bachelor of Arts at U.C. Berkeley. He is now a professor at City College in San Francisco.

Mr. Bac Sierra is not an author just going through the motions of painting characters and breathing them alive. Mr. Bac Sierra’s characters seem to jump off the page almost fully formed, realistic, three dimensional and fighting. He is a masterful storyteller and it is a tribute to his skill really that these incredibly violent and hard creatures also inspire empathy. They are victims of so much and yet charge through life refusing to be victimized, owning disenfranchisement in a bizarre and inspirational manner.

This author infuses his main character Lobo with a poet’s voice. Lobo, despite his awful life, has found a niche and a gang and a girlfriend, Sheila, like a balm for his soul, and then the unthinkable happens and a rival gang member himself about to be killed by Lobo turns the tables on everyone and kidnaps the girlfriend. A crack in the armor exposes his weakness for all to see and then he is cornered, roped into a gigantic battle of which there cannot truly be a winner.

Lobo reminisces about his girlfriend as he contemplates his next step. While his language is always couched in violence, swear words and offensive slang, his inner dialogue is almost always lyrical.

“I was a coloured egg cracked open on Easter Sunday, a shattered window from a mighty home run ball. She was my Great Wall.”

While these characters are brilliant and real and the plot rings true in some sad areas of the world, this is not a book for everyone. It is unflinching in its laser sharp look at life in a place where survival depends on killer instincts. Many will not get through this book and others will not look be able to see past the misogyny and violence. But in many ways this story is an important social statement on a time and place in history that demands attention and should be read. This is the author’s first novel, and it is a brave one for sure. Because it is so closely tied to his own life experiences, it will be interesting to watch and see where Benjamin Bac Sierra takes us next.