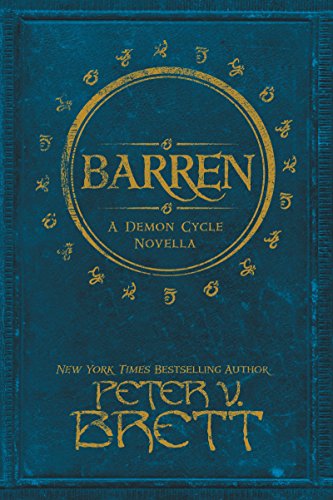 Barren promised to be an interesting read for two reasons: one, it centers on an LGBTQ protagonist, which is something that’s still hard to find in mainstream fantasy fiction, and two, it was billed as a good place to enter the Demon Cycle world if you aren’t already familiar with it.

The story follows the life of Selia Square, also known as Barren, in two separate timelines. The predominant timeline is her current one, post-Demon Cycle, where people are apparently better equipped to handle demons now thanks to special wards that allow them to fight instead of hide. The secondary timeline takes place in Selia’s youth, decades earlier, where she was the founder of the Square Girls Club—ie, the girls who’d rather be with each other than boys—and lover of Anjy Watch.

In the main timeline, Selia is Speaker of the town, a capable leader who people are nonetheless split over supporting thanks to long memories and longer grudges. She’s got a lover who’s about 50 years younger than she—apparently demon magic is quite reinvigorating and Selia doesn’t look nearly her actual age, which seems like a bit of a cheat—but they’re keeping it quiet, just like she had to long ago. The demons that attack the town are going after the folk who live there in new ways, and no one is prepared for the discontent verging into open rebellion that they bring. Selia has to fight to retain her status as Speaker as well as for the life of the town itself, because if they can be turned on each other, it’s the end whether the demons get them or not.

In the secondary timeline we learn about Selia and her early flings, settling in on Anjy, who’s being pressured along with every other young woman in town (and not having read these books before, the casual misogyny is a bit of a shock) to marry and make babies. Men can have multiple wives, apparently. Lucky them. Anjy marries, bad things happen, she and Selia plan to escape the town, Anjy strikes out on her own, and . . .

Well, you can guess what happens next. Selia loses her beloved, eventually marries a “square” man of her own, never produces a child and is dubbed Barren, hence the title. In the main timeline, meanwhile, they fight the mind-controlling demons, win, Selia and her new lover’s relationship is thrust into the open and, if not completely accepted, at least not completely loathed. Cue happy ending. It came to a rather abrupt halt, honestly.

A female protagonist, an older protagonist, and a queer protagonist are appreciated. Less appreciated is that she doesn’t look old, hides her queerness, and still hasn’t buried the hatchet with people she’s known for decades upon decades. Also, if you don’t have a grounding in the main series, the colloquialisms might be hard to get into at first. It made reading feel a bit more like a chore at times.

Overall, Peter Brett writes very well, adeptly putting you in Selia’s shoes and handling both timelines skillfully, so that the reader doesn’t feel confused as to what’s happening when. However, this book is likely to be more appreciated by established readers of the series than new ones. It would have been nice if there were some more demon battles as well. Because, dude: demons. Battling. Awesome. More background on wards and how people use them would have been helpful for a Demon Cycle novice, too.

If you’re a fan of Peter V. Brett and The Demon Cycle, then you’re definitely going to enjoy this novella set in the same world. If you’re new and considering giving it a try, perhaps it’s best to start with The Warded Man instead of Barren.

Cari Z. is an award-winning author who writes LGBTQ science fiction and fantasy stories, novellas, and novels. Her most recent book is Off the Beaten Path (Dreamspinner Press, 2017).