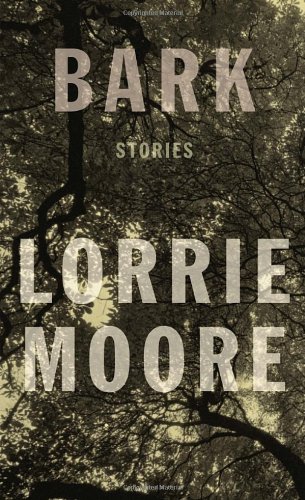 “Despite its flaws, Bark is an unsettling, poignant, cohesive and extremely well written collection of stories.”

Like those of most of Moore’s stories and novels, the narrators and characters in Bark are smart, sarcastic, sharp, and funny. This narrative tone is particularly effective when Moore employs wry third-person narrators as in “Debarking,” “Foes,” and “Referential” and the clever, bitter first-person narrator of “Thank You For Having Me.”

For instance, Moore opens the terribly disturbing story “Referential,” about a mother and her mentally ill son, with dark humor: “Mania. For the third time in three years they talked in a frantic way about what would be a suitable birthday present for her deranged son. There was so little they were actually allowed to bring: almost everything could be transformed into a weapon and so most items had to be left at the front desk, and then, if requested, brought in later by a big blond aide, who would look the objects over beforehand for their wounding possibilities.”

In “Thank You For Having Me” the biting sarcasm and wit of the narrator, a divorced, single mother of a teenaged daughter, works well. The story depicts the ill-fated second marriage of the narrator’s daughter’s former babysitter. In line with her general tone and attitude towards marriage the narrator describes the wedding party: “The bridesmaids were in pastels: one the light peach of baby aspirin; one the seafoam green of low-dose clonazepam; the other the pale daffodil of the next lowest does of clonazepam. What a good idea to have the look of Big Pharma at your wedding. Why hadn’t I thought of that? Why hadn’t I thought of that until now?”

Yet in some stories the sarcasm is too much or the characters are just a bit too clever and sound too much like Lorrie Moore to be credible. For example, in the story “Wings” the main characters Dench and KC, failed musicians and slackers, exchange too much witty banter with one another to be believable, and the narrator’s voice and tone are too close to those of KC.  If only so many people from every walk of life were as clever and well spoken as Lorrie Moore.

Sentence by sentence, the stories in Bark are extraordinarily well crafted. Lorrie Moore can write. Moore’s prose is clear, pointed but often understated, interesting, and original. In the story “Referential” she masterfully describes the self-mutilating teens at the mental hospital: “In the carousel spin of the room, the white webbed lines resembled coarse campfire writing, as when young people used to stiffly carve the words PEACE and FUCK in park picnic tables and trees, the C three-quarters of a square. Mutilation was a language. And vice versa. The cutting endeared her boy to the girls, who were all cutters themselves and seldom saw a boy who was one as well, and so in the group sessions he became popular, which he neither seemed to mind nor perhaps really to notice. When no one was looking, he cut the bottoms of his feet. He also pretended to read the girls’ feet like palms, announcing the arrival of strangers and the progress toward romance—‘toemances!’ he called them—and detours, sometimes seeing for himself the words they had cut there and referenced as their fate.”

The most effective stories in Bark are those that focus on the personal, namely relationships, families parenting, divorce, and friendships. These include, “Paper Losses,” “Wings,” “Referential,” and “Thank You For Having Me.” When Moore mixes the political with the personal, specifically with references to 9/11, the Iraq War, and Abu Ghraib, her stories are less successful. For instance, the tale “Debarking” a story about a newly divorced father who starts dating a less-than-sane woman is periodically interrupted with references to the war in Iraq. The characters and their relationships are far more compelling than the war references, which seem tacked on and are poorly integrated into the plot or narrative. The same can be said for the stories “Foes” and “Subject to Search.”

As for the title. . . . It is attention grabbing but a bit too subtle. If Bark alludes to a dog’s bark, does it connote inarticulate anger or bitterness? The stories certainly are biting but also highly verbal and clearly articulated. As the cover photo may suggest, Bark refers to the bark of a tree. Is this a reference to a hard shell or protective covering? If so, its connection to the stories in the collection is unclear. The three epigraphs with references to both dog barks and tree bark don’t quite justify this elusiveness. Despite its flaws, Bark is an unsettling, poignant, cohesive and extremely well written collection of stories.