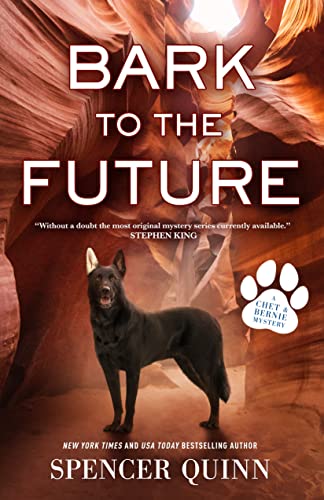 “Without the dog’s thoughts, the story would still be a good one, but as told through his eyes, the story takes on depth as it wheels us through the tangle of investigations, wrong turns, and a satisfying ending.”

Chet and Bernie are partners in the Little Detective Agency. Nothing unusual there except Chet is a black German Shepherd mix with one white ear. Bernie Little is Chet’s human partner.

For anyone who loves dogs and believes they know more than humans do, this book is a must. The entire story is told from Chet’s perspective.

Author Spencer Quinn takes the reader through the book entirely as Chet sees life, work, and Bernie. The endearing part of the story is living it through Chet’s eyes. He shares memories of previous adventures and takes credit for resolving any problems by a “bite in the pant leg” of any perpetrator.

Bernie and Chet are never apart. They experience everything together, although from different perspectives. And when Bernie gets in a dicey situation, it is Chet who comes to the rescue . . . well, and sometimes vice versa. They are definitely partners.

As the story opens, Bernie has purchased a new Porsche, “The Beast” as Chet refers to it. Chet gets the shotgun seat, “I got my head and body properly organized, sat up straight, and howled at the moon, although it was daytime and cloudy to boot.”

On this first ride they encounter a homeless man who refuses to take their money and they soon discover that this disheveled man (Rocket [Martin] Saluka) was a classmate of Bernie’s back in high school. Bernie buys him a hamburger but the next day when they go back to the spot where they met, Rocket has disappeared.

The key to finding Rocket is a switchblade knife (with a broken point), a knife that belonged to Rocket but Bernie finds it at a homeless shelter where Rocket lived for a very short time. Bernie follows the provenance of the knife, and this search takes him and Chet through a maze of memories and reacquainting with high school acquaintances—some friends, some not so much.

The knife takes Bernie and Chet back to a chemistry teacher, Mr. Kepler, now retired, who first has the knife. Mr. Kepler is creepy and does not retain the knife for long. He shares the names of his chemistry class students (any or all of whom could have stolen the knife), with Bernie and Chet continuing their search with each of the now, adult students.

Throughout the search, Chet keeps the reader alert to everything they do, and it is through Chet’s first-dog narrative that locations are described, situations come to life, and the relationship between B and C grows. “You can get hungry and thirsty in our line of work. We stopped off at the Dry Gulch Steakhouse and Saloon, our favorite spot in the Valley, where they know how to take care of the hungry and thirsty. The day was cooling off by then and we sat out on the shaded patio. Pablo—he’s the chef—came right over with a water bowl and a paper plate of steak tips for me.”

In a scene where they visit Rocket’s father in prison, Quinn goes on to alert the reader to what kind of a man Saluka senior is, and he does this through Chet’s eyes! “The dude in the wheelchair stared at us. We stared right back. Some men . . . are hard men. No matter what, they never do right by you. I can smell that wrongness and I smelled it now . . . not just the anger inside, but also a sourness, plus darkness.”

Quinn’s premise takes the reader from the missing high school classmate, to a murdered homeless shelter padre, to a long-missing girl—each person connected with the switchblade knife. Each meeting with the one-time classmates brings Bernie and Chet closer to finding Rocket—alive or dead?

Without the dog’s thoughts, the story would still be a good one, but as told through his eyes, the story takes on depth as it wheels us through the tangle of investigations, wrong turns, and a satisfying ending.

Throughout, the reader worries about Chet’s safety as well as Bernie’s safety and in the requisite climax scene, one can’t put the book down until the outcome is clear.

Quinn’s writing style is unique, putting the reader right into Chet’s mind. This is a quick read, as Quinn puts all the pieces of the puzzle in place, resolves the mystery, and leaves us waiting for the next installment of Chet and Bernie and the Little Detective Agency.