Barefoot to Avalon: A Brother's Story 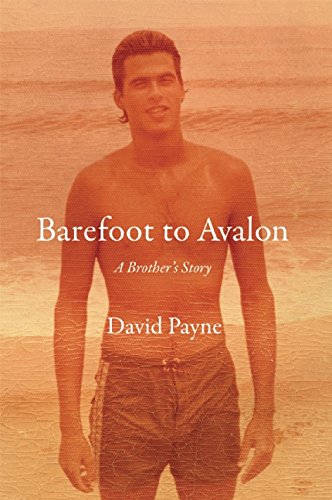 “It is a memoir full of ache. An ache siblings understand.”

Could there be a more potentially fraught condition than siblinghood? Who is loved most? Who is given most? Who takes more than one should, asks for more than one gives, dominates or disappears from the everyday circumstance? There are tales of perfect sisterhood and mythology spun from heroic brothers. There are true stories as well. But in between lie all the shades of gray—the siblings who loved but fought, who hated but tried, who lied in service of kindness, and who (when it grew too hard, when the apologies were unaccepted) simply stopped trying.

Barefoot to Avalon is a brother story—a memoir written by the acclaimed novelist David Payne. It’s about Payne’s younger brilliant brother, George A., about the mental illness that undid him, about the early rivalries and the later neglect, about the day that George A.’s life disappeared in Payne’s rearview mirror as they were driving Payne’s possessions from a northern home to a southern one. George A. had been living with the brothers’ mother for many years by then. He had lost his marriage and his job. He had come to help Payne of his own volition, despite the distance that had grown between the men.

And then the car he was driving fishtailed. Payne sees and later remembers it all in terrifying slow motion.

The catastrophic death of George A. frames Barefoot to Avalon. The questions about George A.’s frame of mind on that driving day. The self-incriminations of Payne himself. The weight of responsibility. But in order to give the tragedy its deepest context, Payne unfurls, in these pages, his own growing up. The family history of mental unwellness and violence. Payne’s obsession with words and running. Payne’s struggles to find the right woman and to love her well. Payne’s highs and lows as a novelist. Payne’s terrible recognition that, in some way, he has become like the father he did not like or trust.

The language here is tangled, knotty, fisted, and often gorgeous. Memories are layered, lost, recovered. There is self-incrimination. There are missed chances. There are last words that shouldn’t have been last words. There are unfinished conversations. Payne writes, in Barefoot, about writing Barefoot, about the fear all true memoirists have about exploitation. He writes, at times, in breathless fury—foisting dream upon imagination upon memory upon fact, moving across time, narrowing in.

It is a memoir full of ache. An ache siblings understand.