The Barbizon: The Hotel That Set Women Free 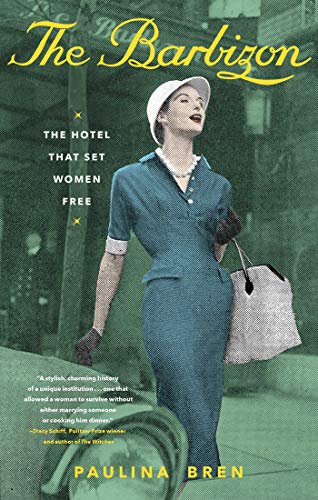 “As impressive for empathetic portraits of individual women as its ambitious scope, The Barbizon should be an essential text on the topic of women’s studies.”

From 1928 to 2007, 140 East Sixty-Third Street was the address coveted by young women with dreams bigger than their small towns could hold. Armed only with a suitcase holding everything they owned in the world, they arrived at the Hotel Barbizon, which earned its reputation as “the premier landing spot for young, ambitious beautiful women.” If they made it there, success may not have been guaranteed, but doors certainly opened.

Aspiring actresses, writers, and models alike tilted their lovely heads upward to gaze, open-mouthed, at the Gothic-faced building. Hearts beating out of their chests, between themselves and a room of their own lay a test: A woman must appear sophisticated, poised, and, cringe-inducing truth be told, attractive. In exchange for representing its image, these hand-picked hopefuls were protected from both the men anxious to get near them and a society that frowned upon the idea of women working in direct competition with men.

Like Miss Jean Brodie’s girls, the residents were la crème de la crème. Once admitted, they were given access to separate studios for artists and dancers, lectures to educate and inform, and a full-size swimming pool to help keep themselves trim and attractive. With peers to support and encourage them, women like writer Joan Didion, actresses Grace Kelly and Tippi Hedren, and the Unsinkable Molly Brown worked to secure their fame. Sadly, others less fortunate fell into despair. Broken and hopeless some turned to suicide, success slipping through their fingers.

Paulina Bren’s The Barbizon: The Hotel That Set Women Free promises and delivers not only an encyclopedic history of the iconic hotel itself but also comprehensively explores America’s societal expectations of women from the age of the flapper through the early 2000s. Moving chronologically forward, it follows as the hotel’s reputation for excellence swells, branching out in related directions following the paths of notable icons such as: groundbreaking Mademoiselle editor-in-chief Betsy Talbot Blackwell, Katherine Gibbs and the secretarial school that took over the third floor and launched dozens of women into businesses careers, the Powers and Ford modeling agencies, and charismatic editorial giant George Davis—promoter of writers Carson McCullers, Richard Wright, and Truman Capote, among others.

Perhaps the most poignant figure Bren explores is the sylph-like poet Sylvia Plath, resident of the Barbizon in June of 1953. Earning a coveted guest editor spot for Mademoiselle, she spent her month working herself into a nervous breakdown shadowing editors, reading and responding to manuscripts, and searching for a husband—all feeding directly into her novel The Bell Jar. The Barbizon became the fictionalized ”Amazon,” several characters recognizable as people she met—a few unlucky souls skewered mercilessly. Plath cast a long shadow, looming large more than once: the first time immediately after she’d returned home from New York an anxious wreck, gone missing, and attempted suicide; the second upon publication of The Bell Jar and its adaptation to film; then, after her eventual successful suicide attempt. The hotel’s direct influence on her life would forever be imprinted on its façade.

Dozens of interviews and countless articles informed Bren’s research for this book over the several years spent in its creation, and the scholarship shows. As impressive for empathetic portraits of individual women as its ambitious scope, The Barbizon should be an essential text on the topic of women’s studies.