The Bar Harbor Retirement Home for Famous Writers (And Their Muses): A Novel 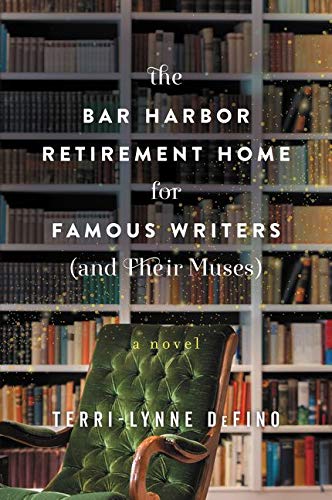 Authors don't stop writing when they get old. Some move to the Bar Harbor Home for the Elderly, where they spend their remaining days schmoozing with their peers and being treated like the idols they have become.

Many years ago, aspiring writer Cornelius Traegar, mentor to Alfonse Carducci, purchased a mansion along the coast of Maine that was badly in need of renovation. The idea was to make this into a final dwelling place for well-known artists in the editorial field. Unfortunately, Cornelius died at a young age away leaving his suite unoccupied for more than a decade. Now Alfonse, old and in poor health, takes up residency here where the affluent live like royalty until their maker calls them home.

Alfonse, known as a prolific scribe as well as a womanizer, is in failing health knows his days are numbered. He spends his time in his room, frail and depressed, waiting to die.

"Even sitting in the sunshine was too much for him. The breeze, warm and steady, coming off the ocean, snatched his breath. He would persevere through the lobster-bake luncheon—of which he could not partake of a single claw, mollusk, or cob—and asked to be returned to his room. Quietly. He didn't want to ruin the festivities for Raymond or Olivia or Judi. He didn't want them to know how truly feeble he was."

Orderly, Cecibel Bringer, who is awed by Alfonse's acumen as a novelist, practically blubbers in front of him, yet manages to draw him out of his shell. Her adoration feeds his tired ego, making him feel young and virile again, at least in spirit.

Never believing he would pen another book, he thinks Cecibel reminds him of his younger days. His old cronies, authors Olivia Peppernell, Raymond Switcher “Switch,” and Judi Arsenault, his prior editor, also inhabit the residence. They band together and surreptitiously initiate a new novel. Set in the 1950s, Cecibel unknowingly becomes their muse, yet their protagonist (Cecilia) is not flawed like Cecibel.

Cecible, hiding away, has been living and working at the home for many years. She is mostly a recluse after a horrendous accident disfigures her allowing her employment to give her the chance to conceal herself from the public while she assuages her pain and guilt. Her respect for Alfonse intensifies as she opens up to him and also makes friends with Finlay Pottinger, the resident maintenance worker. Fin too is trying to overcome a sordid past, yet he is forthcoming about his sins of long ago.

A lively mix of the old and new, The Bar Harbor Retirement Home for Famous Writers offers two novels in one. The reader gets the opportunity to enjoy a tale describing the present-day lives of fictional legendary artisans. The enchanting new story they create helps them reminisce of days gone by while giving insight into the post World War II years. This gives the authors the motivation to not give up while making the most of the time they have left. The depth of emotion and recall of their past is cathartic to the elders, while throughout their venture they demonstrate love and acceptance to a damaged young woman enabling her to believe in herself and make her life worthwhile.