Banzai Babe Ruth: Baseball, Espionage, and Assassination During the 1934 Tour of Japan 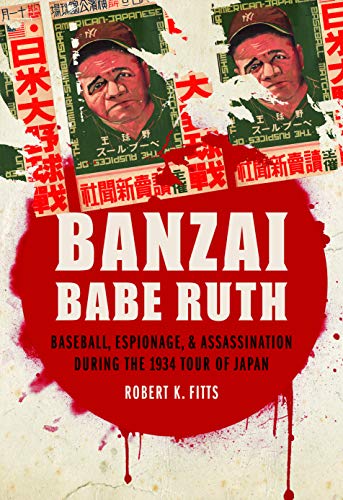 In this carefully prepared history dominated by the larger-than-life player Babe Ruth, author Robert Fitts corrects the errors of previous books about the famous baseball tour of Japan 1934.

Because of his thorough research, Mr. Fitts is able to debunk the notion, for example, that catcher Moe Berg, who was a linguist and world traveler, joined the team in order to act as a spy for the United States government. Berg, he shows, enjoyed filming forbidden scenes and objects, taking advantage of every opportunity, but it was not until later that he joined the OSS and engaged in espionage—in Germany.

Mr. Fitts sets the scene for the 1934 tour by telling of previous tours so that he can contrast the characters and events of the 1934 visit with those of earlier trips, where participants were mostly college teams. Players on the few professional teams that visited earlier often behaved badly, and profits were pocketed mostly by American promoters.

This time a well-known newspaper owner, Sotaro Suzuki, planned the tour in order to sell papers, but he took the trouble to find government support, claiming that the tour, if it could include the famous Ruth, would improve international relations. With the help of catcher Lefty O'Doul, who had extensive contacts in Japan, Ruth was finally (after twice backing out) persuaded to provide the center of attraction on a strong team of professionals, although they had difficulty getting permission from their club owners.

Shoriki drummed up so much interest in the tour and the series of games, scheduled throughout Japan, that fans massed in the streets to provide a screaming welcome, and the stadiums for every game filled up completely.

The players, especially Ruth, clowned during the warm-ups but usually performed seriously during the games, winning every one. Sometimes, however, the score was close, because the Japanese boys and men had been playing baseball since the 1870s and tried hard to beat the pros.

Many college players in particular were highly skilled. Japan had no professional league—yet, but Shoriki envisioned forming one after the visit of the Ruth professionals.

Matthew Perry opened Japan to Western influences in 1868. It was the missionaries, schoolteachers, and railroad engineers entering Japan at that time who brought baseball to the people of the Meiji era, 1868–1912. By the 1930s schoolboys played the game enthusiastically, and the college game attracted a large following in Japan.

Anti-western influences, however, remained. At the time of the 1934 visit, Japan had just indignantly backed out of an international treaty that would have limited its navy to one much smaller than those of the great powers. Ultra-nationalists in the military and government were urging citizens to remember the “Japanese spirit” and scorn the corrupt Americans. Other difficulties were in the news: the Japanese had invaded China; the Rape of Nanking had just occurred; and Chinese fighting in Shanghai against an expanded Japanese occupation of the city was being ruthlessly repressed. But the baseball professionals dominated the popular mind while they were there.

The players had a wonderful time, treated to banquets, teas, formal receptions, and time off to enjoy touring of the national monuments. Some evidently also took advantage of the popular brothels in the isolated town of Hakodate on the island of Hokkaido.

Most wives had been left behind in Tokyo for this trip. Players were not used to staying in a traditional Japanese resort like those in Hakodate, where women servants dressed and undressed the clients and where joint nude bathing was the rule. “Some of the players,” says Mr. Fitts, “became more intimate with Japanese women than they desired.”

Mr. Fitts offers several mini biographies of well-known Japanese players like Jimmy Horio, Eiji Sawamura, and Victor Starfin who took part in the games against the American professionals. He also presents the Americans' evaluation of the 1930s Japanese as players, comparing them with the abilities of the Americans and explaining their strengths, weaknesses, and special styles of play.

The result of the 1934 tour was a rush of enthusiasm on the part of the visitors for Japan and the Japanese, corresponding with loud cries of delight and warm feeling from the Japanese fans for their entertainers, particularly Ruth. This enthusiasm carried over into the United States—for a while. Cultural representatives, sports media, and government officials alike vowed that baseball had proved to be a great international peacemaker.

So when the ultra-nationalist military faction won out in Japan and the Japanese war machine attacked Pearl Harbor in 1941, most of those who had taken part in the 1934 tour were shocked.

Ruth in particular was furious, throwing all his Japanese souvenirs out the window of his 11th floor New York apartment (he had come home with 16 pieces of luggage). Ruth had believed every word of the Japanese who during his triumphant visit expressed deep devotion to him, calling out “Banzai Babe Ruth!” every time he appeared. He felt betrayed by the Japanese attack.

Throwing himself into the war effort, Ruth raised a great deal of money to fight his former worshippers.

In Banzai Babe Ruth Mr. Fitts includes photos that help us get the feeling of what it was like to be part of this landmark tour. Especially striking is the strange-looking painted portrait of an overweight, out-of-shape Babe Ruth with slightly slanted eyes, a powerful image that appeared on posters in Japan advertising the tour of the 1934 American players.

In Banzai Babe Ruth the only obvious slip Mr. Fitts makes is a common one: calling the Japanese emperor by the name of the era of his reign. He constantly refers to “the Emperor Meiji,” but Meiji is not an emperor's name; it's the name of the era during which the Emperor Mutsuhito reigned. Mutsuhito gave the name “Meiji” to his reign. The word means “enlightened.” The correct way to refer to the ruler of 1868–1912 is not “the Emperor Meiji” but “the Meiji emperor.” Let's give him his due: it was Mutusohito, the Meiji emperor, who allowed Westerners to bring American baseball to the then-isolated Japanese. To many Japanese of the 1930s, Mutsohito must have seemed enlightened.