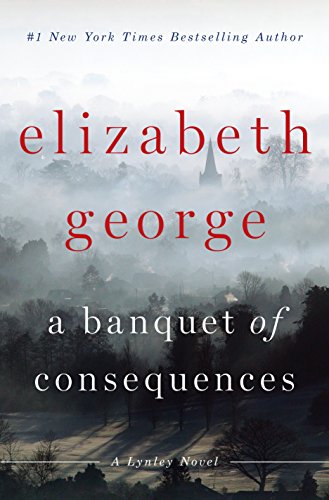 “It’s not a perfect situation, of course. But really, when you think about it, what actually is?”

The novel begins with the shocking breakdown and subsequent suicide of talented artist and horticulturist, Will Goldacre. The toll his death takes on family and friends is enormous, and well documented by George. As is to be expected, no one manifests her grief more fully than his mother, Caroline. She throws herself into saving the crumbling marriage of Will’s elder brother, Charlie, while neglecting her own deteriorating marital relationship. Upon having her efforts rejected, Caroline then pours all her considerable energy into “helping” a noted author and feminist in her work.

Things become complicated when that author dies unexpectedly and Scotland Yard is called in to investigate. In a slow build, family tragedy and murder become entwined and revealed secrets become police blotter facts.

As George’s 19th Detective Inspector Lynley novel, A Banquet of Consequences is a mixed bag of the interesting and the blasé. Lynley himself, though the titular character in the series, is flat in this story. Perhaps counting on the reader having become acquainted with the DI in earlier books, George only makes the barest pass at introducing him here. Other than establishing that he’s a snappy dresser who’s discovered he liked his detective sergeant partner better when she was a noisy slob and who lost a wife in a previous novel, he is an enigma.

The aforementioned partner, DS Barbara Havers, is the real mover in this book. After meeting Caroline at a speech/book signing by the famous feminist, she is stricken by an instant distrust of the woman. Not satisfied by the initial report of unexpected, but natural, death, she pursues an investigation of the feminist’s death as a murder. Supported by Lynley in her search for truth, she begins to uncover secrets that have the potential to destroy lives.

A Banquet of Consequences shines when George is exploring the dynamic between families and friends. The Goldacre family alone is worth a book. Laden with wives, husbands, lovers, and exes, this family is a stew of issues and provocative backstory. Throw in Clare Abbott, the author, and her friends and lovers, and you have another story entirely, filled with still other intrigues and problems.

George brings a relish to her recounting of the travails of these characters; it is evident that she enjoys slowly revealing the depths of these people and the muck that underlies the bright gloss each shows the world.

The book’s luster dims when George brings in Scotland Yard, unfortunately. Lynley is a cypher, barely present except when he is either propping up Havers or pleading her case with their distant and Havers-averse boss. Barbara is a more interesting character, but many of her interactions with the story could earn it the title A Banquet of Coincidences. It is coincidence that she hears Clare in the radio whilst on the way to a shopping date with a coworker with whom she has no believable connection. It is coincidence that she spots a colorful poster for Clare’s presentation in a Tikki Masala shop window (really?). It is a coincidence that she meets Caroline, becomes acquainted with Clare, and that she sees a report on Clare’s death while ducking out on yet another unbelievable outing with the fashionable co-worker. Many twists in the story rely on coincidence, and that’s not so good in a detective novel.

This is a novel that takes time to read; at 592 pages, it’s a substantial investment. George does a good job of layering her revelations in the case, and each step Havers takes in solving the case is taken in such an orderly fashion as to be credible, despite the coincidences. In taking such a long time to make her case, though, George keeps escalating detail upon salacious detail about the private lives of her characters in such a manner that the ultimate revelation of the killer is underwhelming.

Those who love Lynley as a character or this particular branch of Scotland Yard (as depicted in novel form) will likely sink into this book like they would a warm (and very large) blanket. Read as a spotlight on some highly dysfunctional relationships, A Banquet of Consequences is entertaining. As a mystery novel . . . not so much.