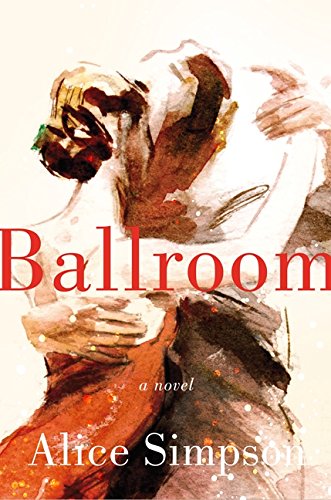 “Alice Simpson’s debut novel promises to be an interesting read [but] Ballroom doesn’t quite deliver on the promise.”

Alice Simpson’s debut novel promises to be an interesting read: a cast of characters with a shared passion for dancing who gather weekly at New York City’s Roseland Ballroom. Ballroom doesn’t quite deliver on the promise.

The cast includes Harry, a reclusive 65 year old who survives on Social Security checks and the meager income he earns from offering dance lessons to lonely females.

He manifests overt OCD tendencies, pilfers toast from the local East Village Senior Center, and harbors a secret love for Maria, the beautiful and sexy college student who lives downstairs with her protective father. Harry has been giving Maria dance lessons on the sly since she was a child. Maria’s public dance partner (and secret love interest) is Angel, who aspires to open his own dance hall.

There is also Sarah, a lascivious redhead, married three times, who’s still looking for Mr. Right: ideally a handsome leading man from an old film. Not surprisingly, she hasn’t found him yet.

Joseph, no leading man, has a crush on Sarah. Gabriel (whom Sarah has her eye on) is unhappily (and secretly) married to Myra, once a spirited woman and successful artist. Soon after marrying Gabe, Myra starts to drink heavily, effectively sluicing both her career and her marriage. Gabe deals with Myra’s drinking by heading off to Roseland in search of his latest conquest.

Any one or two of these characters might have made for a compelling novel, provided a central theme and a throughline. As it is, reading this novel is a bit like watching a dozen people in a ballroom, each performing a different dance; it’s difficult to know where to look.

Ballroom unfolds in a series of short vignettes from alternating points of view. The choppy scenes make it challenging to keep track of the various members of this crew of self-absorbed malcontents, obsessed with appearance and performance.

Perhaps Simpson intends this absorption with social convention for her characters, as she begins each chapter with an edifying epigram dating back to the late 19th and early 20th centuries. “A gentleman, making a formal call in the morning or in the evening, must retain his hat in his hand. He may leave umbrella and cane in the hall, but not his hat and gloves.” (Thomas E. Hill, Evils of the Ball, 1883) The characters who gather at the Roseland Ballroom are more concerned with masking obvious sweat stains, buying killer dance shoes, and mastering the Fallaway Rock and Swivel than in what accouterments to leave in the hall, but still.

Because of the breadth of stories she’s attempting to tell, Simpson often relies too heavily on exposition in her narrative and dialogue. The characters don’t talk with one another so much as past one another, as one might if waltzing cheek-to-cheek, while gazing around to see who else is in the room, how well they’re dancing, and with whom.

Simpson’s writing is strongest and the novel most satisfying during the characters’ backstories, which are poignant, well drawn, and help the reader understand why these people are so emotionally stunted.

There is also one quite moving scene in which Sarah invites Harry over for dinner. Masks are finally dropped, and we see two real (if somewhat socially awkward) people, attempting to relate as human beings rather than as dance partners. It leaves the reader hungry for more. Instead we are spun back out onto the dance floor for more superficial interaction.

Toward the end of the book, Sarah questions whether she really knew any of her compadres at the Roseland Ballroom after years of having shared “. . . just one quick dance after another with different partners.” Readers might find themselves asking the same question when they finish Ballroom.