Ballpark: Baseball in the American City 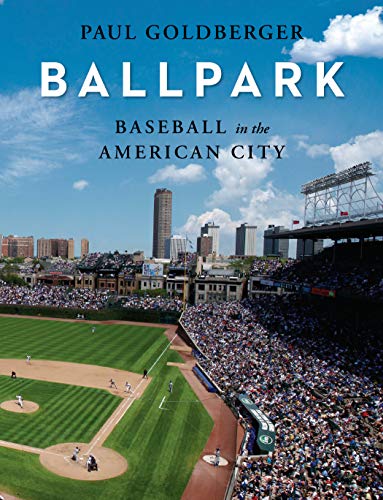 Readers have been waiting for this book since 1991, when Goldberger’s New York Times review of the brand-new Chicago White Sox ballpark was published. It was an architectural review of a baseball stadium, and for baseball fans, the review was fascinating. We wanted more.

Criticism of architecture and publicly enjoyed spaces isn’t a common, or long-lingered, discussion topic for sports fans. Unlike, say, Classical Greece, our culture tells us that the things we value are the things that we own, or aspire to own. Assessing architecture is generally the purview of the very rich. However, for the price of a pretty good ticket to a game, Ballpark offers up the world of architecture to baseball fans, expanding our knowledge and opening a critical eye toward the stadiums in which we sit, cheer, drink, and observe through so very many innings.

The Catal Huyuk of enclosed baseball parks, to which an admission was charged, was The Union Grounds, in the Williamsburg neighborhood of Brooklyn, in 1862. Through the study of game sites, Goldberger brings focus and clarity to the beginnings of baseball, from club teams—the Knickerbockers, the Eagles, the Gothams—who trod the crab grass of Manhattan’s Madison Square, Hoboken’s Elysian Fields, and undeveloped lots—to the idea of a grounds-owner trying to make money from the spectacle by charging admission, what Goldberger surmises was the price to enter the Union Grounds: a dime.

Money makes the world go around, and Goldberger rightly touches on gambling, which in the 19th century was as much a part of American sporting events as perspiring athletes, and on the selling of food and alcoholic beverages at the ballpark. Much is made of the 1880s owner of the St. Louis Brown Stockings, Chris van der Ahe, who figured that owning a baseball team would enhance sales of the sudsy, brown liquid produced at van der Ahe’s brewery. His team formed up with the American Association, which, for good reason, was nicknamed the Beer & Whiskey League. Golderberger notes the forever tension with which every owner deals, between the genteel, well-heeled clientele, both male and female, and the most boisterous fanatics (mostly single men) who, in any era, define the word lewd, and often, the word drunk. Goldberger points out that some early baseball parks built sectional outfield bleachers, fenced in like corrals, to keep the rowdies at the edge of shouting distance from the upper crust, across the field, in the grandstand.

And there were beautiful wooden grandstands built in the late-19th century, notably the South End Grounds in Boston with its elegant pinnacles that looked like witches’ caps, and Cincinnati’s neo-Classical Palace of the Fans. Manhattan’s Polo Grounds, built on a plain below Coogan’s Bluff, had an array of stairways and ramps of varying steepness that connected it like octopus legs to the outside world. These wooden structures were quickly built, and often, quickly burnt.

Team owners turned to concrete and steel construction. Goldberger expresses special appreciation for Philadelphia’s Shibe Park (1909,) Pittsburgh’s Forbes Field (1909), Fenway Park (1912), Wrigley Field (1914), and he reveres Brooklyn’s Ebbets Field (1913). Like a fan gushing over their favorite player of yore, Goldberger explains how it all came together for Ebbets Field, and how its neighborhood grew up with it.

Throughout the book, the phrase “urban fabric” is used seemingly more than you hear, at a baseball game, the phrase, “get your peanuts!” Ebbets Field is Goldberger’s ideal of a ballpark, and it’s hard to make an argument against it, unless you own a Major League team and your primary quest is making as much money as possible.

And so we move from quaint ballpark to Yankee Stadium (1923), and those inspired by it. In sentences as assured as a game’s worth of Bob Feller fastballs, Goldberger describes Cleveland’s ill-conceived and ill-sited “Mistake By The Lake,” otherwise known as Municipal Stadium (1931), a building so cavernous and unfriendly that the Cleveland Indians continued, for ten years, playing weekday games at ramshackle, decaying League Park.

We get the Dodgers’ move across the country to Chavez Ravine (1962), the Giants and their wind-gust-and-fog-friendly Candlestick Park (1960), the Mets’ Shea Stadium (1964), plus a full explication of all that was wrong with Houston’s Astrodome (1965). Nothing is more effective at cutting the fan from the “urban fabric” than walking into a dome. And so we’re given a quick tour of the bland, impersonal concrete doughnuts surrounded by thousands of parking spots that plagued Philadelphia, Cincinnati, Pittsburgh, and St. Louis.

But it all changed in Buffalo. Wait. But Buffalo doesn’t have a Major League team! Correct; but it does have the minor league Buffalo Bisons. Goldberger points out that in 1988 the Bisons first took to Pilot Field, a ballpark that brought fans into the city, and had the scale and charm and architectural details that evoked Shibe Park, Forbes Field, Ebbets, Wrigley, and Fenway.

Then, a baseball miracle: Oriole Park at Camden Yards debuted (1992), the first “retro” stadium in the Major Leagues. Mr. Goldberger highlights two heroes: Larry Lucchino, an Orioles executive, and Janet Marie Smith, an architect from New York, who wrote a letter to Lucchino that led to an interview that led to a position with the Orioles that influenced the design of the Orioles ballpark. From integrating old buildings into the site of the park, to its orientation and connection to the city, to the design of the seat supports, gates, and a thousand other details, Oriole Park has been hailed as the most enlightened and influential ballpark of its moment in the 150-year history of ballparks.

It has deeply influenced the many Major League stadiums built ever since, almost all “retro” stadiums, all better places than the stadiums they replaced, except unarguably in the case of Detroit, which abandoned Tiger Stadium in 1999, which Goldberger compares to Fenway Park and Wrigley Field. Detroit demolished Tiger Stadium in 2009, breaking the hearts of hundreds of thousands of baseball fans, and more specifically, Tigers fans.

Goldberger gives every new stadium his expert once-over, but seems to pull his punches regarding the new Yankee Stadium (2009), which has bleacher seats with views obstructed by a faceless black cube (reminiscent of the monolith of 2001: A Space Odyssey), which houses an enclosed centerfield sports bar; and those wide, cushioned seats lining the infield, with a concrete moat to, seemingly, protect the billionaires from the millionaires. Life at the Stadium has been made unwelcome for the heirs to those 19th century fans sequestered in outfield bleachers, who were known in the old Yankee Stadium as Bleacher Creatures.

With architecture that mimics aspects of the old Yankee Stadium, including the distances to the outfield wall, one is consistently disoriented. It’s like an architect building you a house across from your childhood home with most details the same, but with better bathrooms, wider hallways, and a larger dining room. You’d regularly look up in the new house and wonder where you are. But as we old fans fade away and are replaced by those who never knew old Yankee Stadium, they’ll be fine in the only Yankee Stadium they’ve ever known.

Like the HIT IT HERE sign that was a nonsensical feature of the outfield wall of Oriole Park, and eventually painted over, there are a few minor flaws with the details of Ballpark. Outside borders on each page are seemingly as vast as the foul ground at the Oakland A’s ballpark; asterisks distract, leading to footnotes that reference preceding or future chapters for no good reason; and the author references the Polo Grounds “high on Coogan’s Bluff” when in fact it was sited below Coogan’s Bluff. Perhaps in future printings, the book’s architects can correct these little details.

From now on, when team owners make noise about replacing their current stadium, every owner and every architect will consult Paul Goldberger’s Ballpark, and everyone will be considerably less likely to make a colossal, Bill Buckneresque, error. After waiting a quarter century for it, add Ballpark to your baseball book hall of fame.