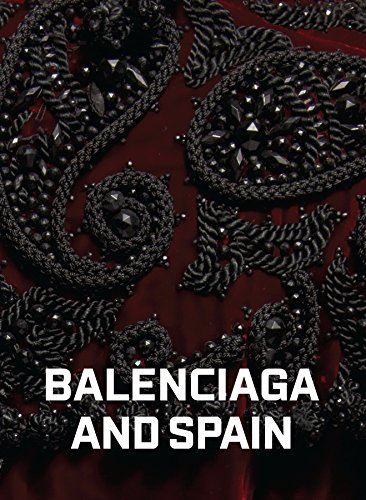 Balenciaga and Spain is a brilliantly conceived homage to one of the greatest, if not the greatest, designer of the 20th century.

Mr. Bowles unselfishly removes himself from the equation, which is a rarity in fashion books penned by popular experts. He presents the great love story Cristobal Balenciaga had with his home country, Spain, and how that love affected his métier with its many historical and contemporary references.

Mr. Bowles offers up for consideration many areas of Spanish life that inspired Balenciaga in his work; this is done in such exquisite detail, that the reader is literally shown the origins and the end results (side by side). Balenciaga and Spain is stunningly curated, and delivered in such a manner as to keep even the most seasoned fashion historian/student engrossed in its subject matter.

Some of the most arresting images—of which there are many—reveal Balenciaga alluding to Spanish art, Spanish dance, religious artifacts, and his beloved bull fighting. Mr. Bowles so convincingly shows us exactly where and how Balenciaga drew on these specific references that one might wonder if the designer ever suffered the anxiety of influence.

We are given direct quotes from some of his most illustrious clients and collaborators, quotes that reinforce the talents of a man who shunned the spotlight and instead preferred the role of creator rather than posing as the face of his fashion design house. The cast of quotable notables includes many fashion greats such as Chanel, Ungaro, Givenchy, Courreges, Vreeland, and Carmel Snow to list just as few, as well as many of his faithful clients: Gloria Guinness, Rosamond Bernier, Mona von Bismarck, and an ever growing list of European royalty and social elites.

To demonstrate the vigilance with which Balenciaga approached his métier, Mr. Bowles offers one specific story which speaks volumes about the storied designer: When offered to design an airline’s outfits for its female flight attendants, Balenciaga had but one question, “How will I personally fit all 600 of them?” Such moments speak to the ethic and the art practiced by Balenciaga.

This is a book that will enlighten as well as entertain anyone (student or aficianado) who has any interest in the evolving world of fashion. For the more experienced, Balenciaga and Spain will reinforce what a great couturier Balenciaga was, making clear why he has been anointed to a nearly godlike level within the annals of rarefied fashion history.